Yesterday, the market rallied when hurricane Gustav produced less damage than expected. Energy stocks crumbled and the magnitude of the decline surprised many traders.

Three new tropical storms are on their way and energy supply disruptions are likely. This should be keeping a bid to energy prices, but it’s not. The Russian/Georgian conflict could also lead to energy disruptions, but the market is focused elsewhere. Demand destruction seems likely as global economic expansion slows.

Overnight, Asian and European markets traded lower. There are signs that economic activity is decreasing in those two continents. At one point, many analysts thought that global expansion would pull the US through this recession. Some even spoke of “decoupling” where the US would falter while the rest of the world prospered. We now know that all economies remain interdependent.

This morning, factory orders in July were slightly better than expected. The rise was due to an increase in transportation orders and that is consistent with last week’s durable goods number. A report from Challenger, Gray & Christmas showed that layoffs continue to rise. During the first eight months of 2008, layoffs were up 29% compared to the first eight months of 2007. Tomorrow morning, the ADP employment index and the initial jobless claims will set the tone for the market. While these numbers are important, all eyes will be fixed on Friday’s Unemployment Report.

Earnings season has ended and interest rates should remain stable. Consequently, I believe the market will seek direction from the Unemployment Report. If the unemployment picture has improved, the market could stage a nice rally and a possible breakout above SPY 130. On the other hand, rising unemployment push the market below support at SPY 126.

In today’s chart you can see the volatile trading that has taken place within that range during the last month. The price action is random and this is a very low probability trading environment.

This afternoon, the Beige Book will be released and it is likely to drive the market the rest of the afternoon. Ahead of the release, find a very strong stock and a very weak stock from the table on the home page. Once the market reacts, use the appropriate stock (no options, the bid/ask is too wide) and try to capitalize on that momentum. My gut feeling is that the market will continue to trade lower. Close out the day trade and do not hold overnight positions. 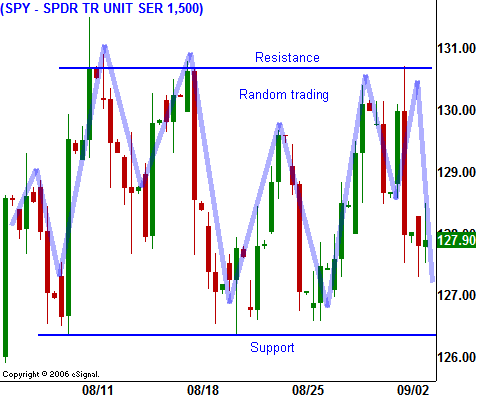