This has been a nasty week for the market. Since Monday’s reversal, we have been in a steady decline. Yesterday, the market dropped sharply ahead of the Unemployment Report and we broke horizontal support at SPY 126.

It looked like most of the bad news had already been factored in as the market braced itself for rising unemployment. The report showed that we lost 84,000 jobs last month and the numbers for June and July were revised lower by 58,000 jobs. The unemployment rate jumped from 5.7% to 6.1%, the highest level since 2003. The market has been looking for a catalyst and now it has one.

As more people lose their jobs, the credit crisis will worsen. Loan defaults will spread beyond sub-prime and another round of write-downs should be expected in coming months. This morning, we also learned that US home foreclosures rose to record highs in the second quarter. The percentage of loans in foreclosure at the end of the second quarter was 2.75% compared to 1.4% in the second quarter of 2007. The US mortgage delinquency rate rose to 6.41%, the highest level since 1979.

Global economies are showing signs of strain and they will not pull us out of this recession. Emerging markets might be particularly vulnerable. Hyper-growth usually spawns aggressive lending practices and we might see write downs in those assets. New capital will be hard to find as credit tightens. Overseas markets reacted to our sell off yesterday and the backdrop was weak before the Unemployment Report was released.

In today’s chart, you can see the breakdown below horizontal support at SPY 126. That was the double bottom that was formed in January and March. The bearish momentum this week will likely result in a retest of the July lows. We are in a seasonally bearish period and the SPY 120 level will likely be tested next week.

Interest rates will remain stable and I don’t believe the FOMC meeting will have much of an impact on the market. Bond prices imply that interest rates will be stable the remainder of the year. The Fed has thrown the kitchen sink at the financial crisis and I do not believe they have anymore bullets to fire.

Earnings for the S&P 500 were down 20% compared to last year. The guidance for this quarter has been very conservative and corporations are in a defensive mode.

Today’s unemployment report will weigh on the market for many weeks to come. Jobs influence economic growth more than any other factor.

Given yesterday’s huge decline, I believe the selling will be rather contained the rest of the day. Next week, I expect to see more selling. In July and August, the market declined ahead of the Unemployment Report. The market had a negative reaction to the release in both instances, but Friday’s declines were rather subdued. However, selling continued the following Monday. I believe that same scenario could unfold as we test SPY 120 Monday or Tuesday.

Financial stocks have been holding up well given today’s news. These stocks have recently bounced from an oversold condition and I believe once today’s news runs its course, the second shoe will drop. Retail has defied gravity and I believe that sector is also vulnerable. Focus on the short side and look for companies that are dependent on consumption. 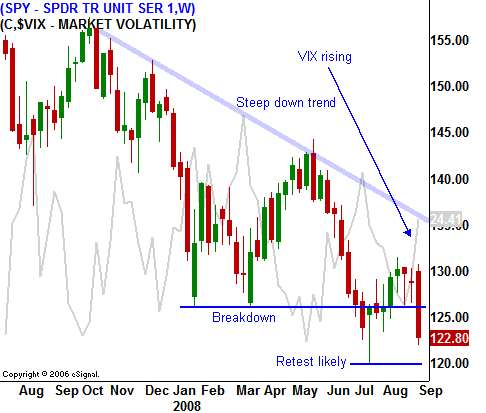