Without A Bailout The Market Would Have Tanked – Don’t Look For A Big Rally!

This weekend, the government finally committed to a Fannie Mae/Freddie Mac bail out. That move was largely expected, but global investors were relieved once it was finalized. An ensuing rally generated short covering and the market gapped up on the news.

In the grand scheme of things, nothing has really changed. Financial institutions can breathe a little easier knowing that these particular bond holdings are secure. Investors can also take comfort in our government’s effort to stabilize credit markets.

The burden for bad loan decisions will fall on the shoulders of the taxpayer. The government will have to issue many new bonds and the appetite for US treasuries could be limited. Many of the loans held by these GSE’s are “negative equity” and it will take more than a decade for them to rebound. One out of ten homeowners has no equity or is “upside down”.

I don’t like the bail out, but there weren’t any alternatives. If the government would have let these two agencies fail, our entire financial system could have fallen. The crux of the problem is that we continue to spend more than we make on a federal, state, municipal and personal basis.

This bailout will not make it easier for new homeowners to buy homes, but it should help current homeowners through this rough period. The homeowner who “bought the top” will cut back consumption because their home is a ball and chain. They won’t feel good about spending money until their biggest asset has a positive value.

Last week’s unemployment report was dismal. The unemployment rate climbed from 5.7% to 6.1% in August. The numbers for June and July were also worse than expected. As economic conditions continue to deteriorate, the cycle worsens. People spent less money and companies contract.

Global economies are also starting to show signs of strain. International companies that have been prospering from a weak dollar and robust emerging markets are now cutting back forecasts. Global growth will not pull us out of this recession as many analysts predicted a year ago.

The market has already given back most of its early morning gains. From my perspective, this is a good shorting opportunity. Nothing has changed from last week and the Unemployment Report should continue to weigh on this market. We are now below horizontal support at SPY 126 and the uptrend line from July’s lows has been broken.

Get short consumer stocks. I believe the market could reverse and if we make a new low after 1:30 p.m. central time, we could finish down for the day. 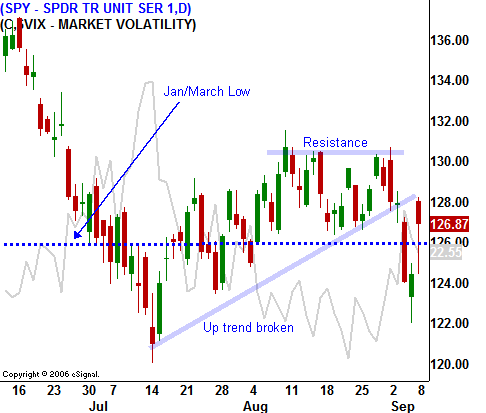