Yesterday’s Decline – Lack of Buying Late – Short-Term Lows Are Near!

Our financial system has been flooded with so much cash that banks are trying to drink water from a fire hydrant. The situation is dire, but I sense that the tide is turning.

This week, central banks around the world coordinated a global interest rate cut. This has never been accomplished before and it reinforces two realities; the credit crisis is severe and the financial system is global. The decoupling theory that suggested the US would suffer an economic decline while the rest of the world prospered was flawed.

Banks are still hoarding money and the Fed is now purchasing commercial paper to give businesses the liquidity they need for day-to-day operations. The bailout has been approved, but the implementation will take time. The price discovery process for ill liquid assets will be arduous.

The Fed has done all it can. Freddie Mac, Fannie Mae and AIG were bailed out. They progressively lowered rates and they opened up the discount window to investment banks. Recently, investment banks have come under the TARP plan and they can unload some of their ill liquid assets. The Fed has accepted most forms of collateral (including equities and mortgages) in exchange for cash. The Fed has been instrumental in takeovers (Bear Stearns, Wachovia, Merrill Lynch…). The SEC imposed a short selling ban on financial stocks and the government provided stimulus through its tax rebate.

I can’t reinforce this concept enough. We all own lots of great assets that we think they are worth a lot of money. Unfortunately, we’ve borrowed money to purchase them. Now that we’ve all mortgaged our future, there is no one left to buy our assets. Those who need to sell some of their things are doing so at greatly reduced prices. These assets, whether they are stocks, houses or cars are worth less than we expected and our financial condition and is not what we thought it was. Banks have helped us finance our “things” and now they are stuck with depreciating assets. As employment conditions slow, this problem will spread until it runs its course.

The government has taken on a huge burden with the bailout program. They could make money off of it or they could lose money. No one knows because the assets have not been priced in the open market and economic conditions are a moving target. One thing that I am certain of is opportunity cost. Our government was forced to commit $700 billion to this crisis and it means that that money will not be available for other uses. I believe Japan serves as a good example and they are still working their way out of a 20-year hole.

The market has more than priced in a slow economy because the chance of a financial collapse still looms. Stocks will either be a great buy at this level or they will fall dramatically.

All of the monetary policies will take time to work their way into the financial system. The market is inpatient and it wants immediate results. Once we have a sign that liquidity is improving, the market will rebound quickly because confidence will be restored. There is plenty of cash on the sideline waiting for this opportunity.

Next week, earnings season will be in full force. Banks will be the focal point. I don’t believe they will decline because they are back-stopped by the Fed. The write-downs might continue, but at least capitalization is not a primary concern. Companies from other sectors will provide cautious guidance due to a lack of financing, but worst-case earnings scenarios are already factored in. Consequently, I believe there’s a chance for a relief rally.

The market has retraced 37% from its all-time high a year ago and we are headed into the most bullish period of the year. Sentiment indicators (bearish sentiment, put/call ratios, VIX) are all at extreme levels. Corporations have very strong balance sheets and they will aggressively buy back shares as their stock price plummets. If the valuations get too low, we will also see a round of takeovers.

On a long-term basis, I am still bearish. On a short-term basis, I believe we could see a massive bear market rally. The shorts are very confident and they are selling into every rally. I don’t believe that the reversal will come from a news event. It will likely start with the first signs that credit spreads are starting to narrow.

The market seems to be finding some support and I suspect that bears are taking profits. In the last hour of trading, buying dries up and the market declines. The same will probably unfold today. I really like tech and agriculture and i am scaling in, knowing that I am early. Place stops below well-defined support levels. If you have shorts, take profits during the last hour of trading and scale out. 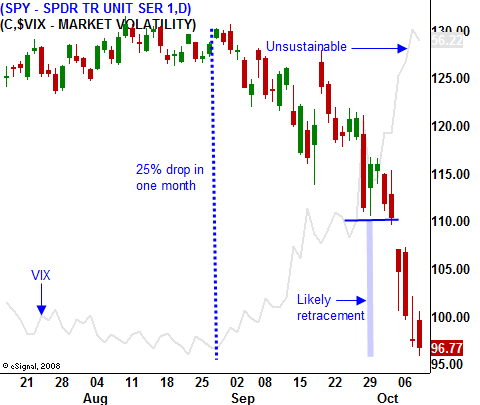