Last week, we made history. In the future you will be telling the grandchildren about the 2008 crash. This was the worst one-week decline in history.

Friday, the market rebounded sharply in the last hour of trading. Speculators felt that European banks would forge a bailout over the weekend. Fortunately, that came to fruition. The Bank of England bailed out three banks at a cost of about $64 billion. In return, the banks will scrap lucrative bonuses that encouraged risk-taking and they will stop paying dividends. Europe’s central banks said that commercial banks will have access to as much US dollar funding as they need. The ECB, Bank of England and Swiss National Bank replaced the existing dollar auction systems with a new fixed-rate system. These moves will facilitate interbank lending.

The S&P 500 jumped higher on the open and it has been able to hold those gains. The market is deeply oversold and shorts will be eager to take profits. We are likely to see a snap back rally to SPY 110.

Global central banks are making a concerted effort to avoid a financial collapse. This has to be a worldwide priority or the entire house of cards will come crashing down.

Credit markets have locked up and even the best run companies are having trouble securing financing. The state of California can’t secure short-term funding for day-to-day operations.

As we start earnings season, corporations will lower guidance. They can feel the impact of the crisis. Retailers are lowering their inventory and they plan to cut back on hiring this holiday season. Consumers are already tightening their belts and they’re scared. October’s unemployment number will be dismal.

In a best case scenario, banks will start lending each other money and the liquidity crunch will abate. That still leaves us with a mountain of bad debt and rising unemployment. The problem will continue to worsen and we are likely to see new problems pop up like dandelions.

We are in a bear market and I expect it to last many years. Snapback rallies like the one where seeing today are fast, furious and tradable. However, you don’t want to overstate your welcome because you are on the wrong side of the market. The long term trend is down.

For the time being, I am trading the rally. I like agriculture and technology. Many am using trailing stops and once the momentum slows, I will aggressively take profits. This rally should still have legs since it has barely started. I am looking for follow-through the rest of the week and option expiration should help it find support.
Be mindful that every rally will present a shorting opportunity once it stalls. 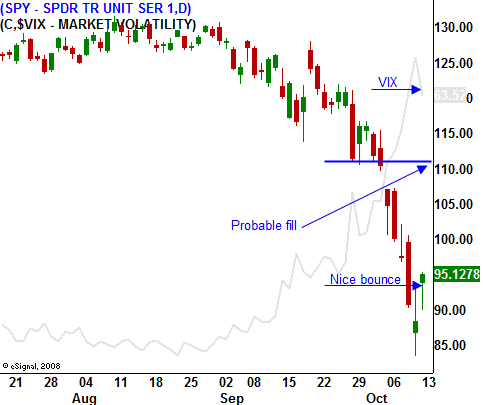