This Breakdown Will Start A Gradual Drift Lower!

Yesterday, the market was able to rebound from an early decline. The bulls are trying to defend support at SPY 85 and eventually they will run out of gas.

In the chart you can see the steep downtrend. Once the initial support was established in October, the market continued to test that level. A series of snapback rallies materialized and each recoil made a lower high. Sellers aggressively “sold the rips” and once again, we are testing SPY 85.

Bad news plagues the market and that won’t change anytime soon. We have a lame duck President and a financial crisis that requires immediate action.

The big three are pleading for a bailout and politicians are making them squirm on the end of the hook. Bad business decisions and astronomical labor costs have pushed these firms to the brink of failure. The $25 billion will keep them afloat until the new President takes office. The government, the taxpayers and the companies themselves know that they will be back for more.

Every American has a right to make as much money as possible and organized labor has served that purpose. Unfortunately, corporations have the right to pull up their roots and move. There are UAW workers who punch in every day and watch movies for eight hours. Production lines are at low capacity due to falling demand and there is not enough work to go around. As long as they show up, they are being paid $74 an hour.

Personally, I don’t want to support a business that has painted itself into a corner. We will simply be throwing good money after bad and these employees will have to eventually find other work. Last year, Goodrich Tire bit the bullet and closed all of its North American operations. They moved to countries where labor is cheap, regulations are lax and taxes are low. Shareholders watched the profits go up and consumers can buy a better product for less. It cost the company millions of dollars, but they calculated an 18 month ROI.

Last night, a Senator grilled Ford’s CEO during the congressional hearing. They asked why profits from overseas are not being used to finance problems in the US. The response was that they are reinvesting overseas profits back into those countries. In other words, those operations are much more efficient and investment worthy.

The US is flooded with an ocean of gas guzzling cars. General Motors has 7000 dealers nationwide and their model was to keep cranking cars out. The UAW had negotiated a sweet deal and laid-off employees make 90% (80% now) of their pay. Rather than lay anyone off, the big three continued to produce. By adding new dealerships, they could keep flooding the market with new cars. Toyota has approximately 1200 dealers nationwide and they have almost as much market share. Toyota’s average hourly labor cost (in the US) is also a third less than GM’s.

CarMax is one of the nation’s largest used-car dealers. Out of curiosity, I took my recently deceased father-in-law’s pride and joy to be appraised. He owned the 50th Anniversary Special Edition Corvette. It has 14,000 miles on it and this collector’s car is in mint shape. I have seen this exact Corvette with more miles listed for $38,800. CarMax prides itself on bidding for cars and not requiring a purchase. After careful calculation, they said they would pay $19,000 for the car. I expected them to be low, but not that low. In essence, this tells me they do not want to buy ANY cars. They were only interested in buying a car at a huge bargain. The fact that this was a special car didn’t matter. Eight salesmen stood idle in the one-hour I was there and not a single person came on the car lot. This is a massive dealership right on an interstate highway between Chicago and Milwaukee.

I shared this story because it sheds light on the entire car industry. Americans are tapped out and we can’t afford to buy new cars. A bridge loan would reward inefficiency and it would keep these companies on artificial support.
Bad news lurks around every corner and this market will continue to just lower. It is on the low-end of its one-month range and option expiration will have a negative bias. I have been telling you that the SPY 85 support level will fail it has today. I am not expecting massive declines from this point on. Most of the damage has been done and a gradual drift lower will set in over many months.

If you are interested in the car, please launch the chat session.
.
. 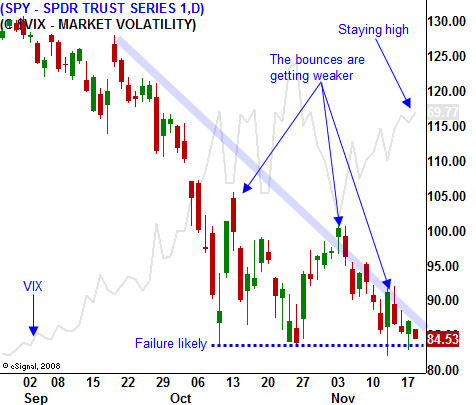