As Expected – SPY 85 Failed – A Price Pattern Will Set In!

A week ago, the market staged a huge intraday reversal after testing horizontal support at SPY 85. That rally was sparked by the G20 meeting and traders did not want to go home short. That one-day rally stalled heading into the weekend.

Leaders from the world’s largest economies agreed that the financial crisis is dire and immediate action is needed. Unfortunately, the biggest economy has a “lame-duck” President in the saddle for two more months.

The market resumed its decline on Monday and bad news seeped in from every corner. The “Big Three” were grilled by Congress as they pleaded for bailout money. The country is truly divided on this topic. These companies were on the ropes before the financial crisis even started. Horrible business decisions and reckless labor negotiations have pushed them to the edge of failure. The average employee for Chrysler, GM and Ford makes $75 an hour. That’s 50% more than other US-based autoworkers.

Congress canceled plans to use $25 billion from the $700 billion bailout pool to help the “Big Three”, knowing that the Bush administration and congressional Republicans were going to reject the plan. Citizens outside of the upper Midwest seem opposed to the bailout. Even autoworkers from the south don’t want to see a bailout. They can’t understand why the government would subsidize a failed business plan and they feel it might rob them of future funding.

American workers have the right to organize and to get paid as much as possible. However, corporations have the right to pull up their roots and move their company. Cheap labor, lax regulations, low health-care costs and lower tax rates tempt them overseas. The “Big Three” have built foreign factories and they are reinvesting those profits abroad. Congressional leaders were angered to learn that those profits were not being repatriated into US operations.

Last year, Goodrich Tire bit the bullet and spent millions of dollars in severance pay and restructuring costs to close North American operations. They moved to cheaper labor markets and their ROI was projected to be 18 months.

There is no easy solution to the problem. Politicians know that $25 billion will simply wet their whistle and that they will be back for more. The nation’s second largest port in Long Beach California is bottle-necked with cars from Toyota, Honda and Mercedes. Dealers can’t move inventory and their lots are full. The country is flooded with cars and consumers are cutting back on major purchases. This glut could take years to work off as cars are still coming off of the line.

It’s estimated that 3 million jobs will be lost if the “Big Three” fail. Today we learned that continuing jobless claims rose to more than 4 million. More than 1.2 million jobs have been lost so far this year and the jobless rate is at a 14-year high of 6.5 percent. The Senate this week is expected to take up a bill (already passed by the House) that would extend unemployment insurance checks for up to 13 additional weeks for jobless people whose benefits have run out. Five states (including New York, Ohio and Florida) will run out of unemployment funds by the end of the year. They too will be looking for a bailout.

The market can’t sustain a bid and yesterday we breached critical support at SPY 85. For weeks, I have been warning that the support level will fail. Each bounce has been weaker and a series of lower highs has developed. A descending triangle in a long-term down trend is bearish and it was just a matter of time until support was broken.

In the coming months, I expect the following price pattern. The market will drift lower over a period of days and then it will have a decent snap back rally to keep everyone honest. There will be opportunities on both sides of the market. I am currently favoring premium selling strategies and I am distancing myself from the action. Time decay is my weapon. Eventually, a decline in implied volatility will also work to my advantage. Stay bearish and take profits along the way. 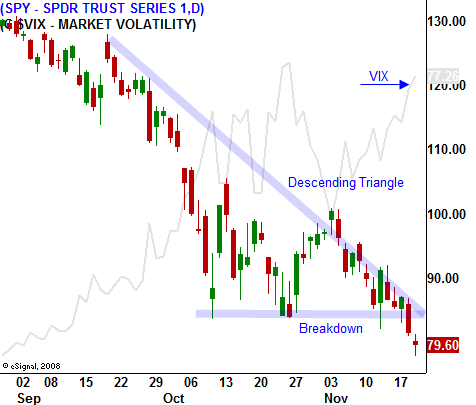