Look For Selling This Week – Support At SPY 85 Will Fail!

Last week, the market staged the best five-day rally since 1933. The move was merely an oversold rally and there was not a catalyst.

We learned that durable goods fell 6.2% in October, more than twice what analysts had expected. Spending fuels two thirds of US economic activity and it fell 1%, the biggest decline since 9/11. ISM came in at 33.8 when analysts expected 37.8 in October. A number below 50 indicates economic contraction.

I suggested scaling into short positions because the retail numbers from “Black Friday” would weigh on the market. The figures were decent, but many analysts are forecasting a “one and done” spending pattern. Shoppers only opened up their wallets when prices were slashed dramatically. They bought only what they needed and they are done.

I also mentioned that the Unemployment Report would attract short-sellers. This month the number will be horrific. It will include the credit shock from September where everything locked up. Continuing jobless claims are climbing and traders will error on the side of caution. Almost every month this year, the market has declined ahead of the number.

In the chart you can see the market barely broke through the down trend line. It is also below the 20-day moving average. These two resistance points will hold and I believe we will fall below support at SPY 85. We might even retest the lows this week.

China, Korea and Japan all had negative economic news and markets were down globally ahead of our open. The terrorist attacks in India are also a reminder of the dangerous world we live in.

The market has drifted lower all morning and the buyers from last week have vaporized. We are in for a nasty day and I don’t believe we will see a rebound late in the day. 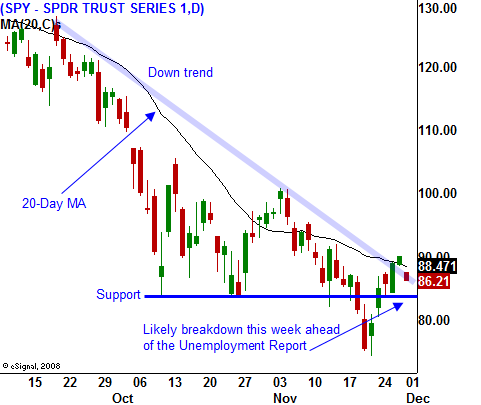