Yesterday, the market posted one of its largest losses ever and we haven’t seen selling like that since October. Last week, portfolio managers marked their positions up so that November’s losses did not look so dire. Unfortunately, bad news looms around every corner.

Analysts believe that Black Friday’s sales could represent a one and done mentality on the part of shoppers. Huge discounts lured people in and they only bought what they needed. Banks are reducing lines of credit and consumers will be forced to use cash. This means that a recovery will take much longer to materialize since people can’t rely on their plastic to carry them through this recession. Debt is what got us into this mess and we will experience pain as we work our way out of it.

Economic conditions are deteriorating around the world and comments from China, Korea and Japan weighed heavily on the market yesterday. Bailouts and stimulus plans are popping up everywhere and all of this debt needs to be financed. Countries will be competing with each other for capital.

Our national debt has skyrocketed 250% in the last eight years. All of the stimulus plans and bailouts will put us even further in the hole and Standard & Poor’s has cautioned that the US could lose its AAA bond rating if it continues down this path. Five of the biggest states are almost out of unemployment funds and they will seek help from the government. California Gov. Schwarzenegger could not get a balanced budget passed and the state is currently running an $11 billion deficit. He projects that in two years that could be a $28 billion deficit this nothing is done.

Major cities are faced with similar deficits. In Chicago, the city is selling Midway Airport. They will use the proceeds to make ends meet. Yesterday, they announced that they are selling all of the city’s parking meters for $150 million. We are so far in the red that we have to sell our remaining assets to meet our obligations. There are countless examples of this happening nationwide.

The unemployment rate continues to climb and this Friday I expect the number to be worse than anyone could have imagined. The credit freeze from September will be reflected in this release. Traders know that selling into the report has been a winning proposition and they will get short with confidence. As the unemployment rate rises, the credit crisis will continue to spread.

Today, the Big Three will outline their survival plans. Chances are they will get the additional $25 billion they seek. Unfortunately, this is a waste of taxpayer money and they will continue to die a slow death. In the nation’s second largest port (Long Beach), cars are stacked up like cord wood. Dealers aren’t accepting new deliveries because they can’t sell what’s already on the lot. The Port Authority doesn’t know what to do with all the cars and they are running out of space. This glut of automobiles could take a couple of years to work off. Banks are not eager to finance new car loans and that is another part of the problem. If the UAW agreed to a 30% cut in wages that might make their survival possible. That would still yield an average hourly wage of $50 and it would be in line with other auto workers in the south. I doubt that will happen since they stated that they “might” consider “some” concessions. Here is an interesting video that sheds light on why US auto manufacturing is in trouble. It is also why the Big Three are reinvesting overseas profits abroad and not recapitalizing operations in the US. They don’t even think the US is a good investment so they want tax payers to foot the bill for their horrible decisions.

By the close Thursday, the market will be lower than it is right now. Traders are nervous and there is no compelling reason to buy ahead of Friday’s number. I believe we could test the lows that were made two weeks ago. 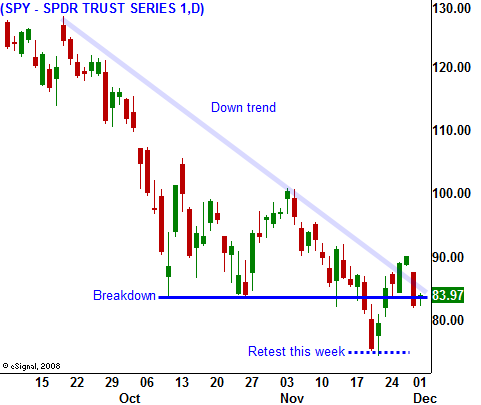