Yesterday, the market took back Friday’s gains. Bears tried to get something going and when they were unable to, buyers stepped in near the close and pared the losses.

As I mentioned yesterday, the market is compressing into a tight trading range. In today’s chart you can also see that a wedge has formed and the VIX has declined to support level. This action suggests a future breakout/breakdown. I suspect that if we are going to break out to the upside, it will happen before year-end. Conversely, if we don’t breakout before year-end, we will break below SPY 85 and test the low early next year.

Experience has taught me to favor the long side heading into year-end. Every Asset Manager will try to “goose” the market if conditions are stable. They won’t stick their neck out, but if each of them allocates a little money, they can soften the blow from 2008. Trading volumes will decline and a little money can go a long way. An “air pocket” rally might shake many shorts out of the market.

Last December, a year-end rally was unfolding and the squeeze was on. However, Asset Managers took advantage of the rally and they unloaded holdings into it. The last few trading days of 2007 were very weak and the table was for 2008. Bears are less likely to keep a lid on this market this time around. Stocks have been badly beaten down and the majority of positions have been unwound. Also, shorts have nice profits and they are eager to lock them in. If the market mounts a rally above SPY 100, the shorts will be covering.

This morning, Goldman Sachs released earnings that were in line and that sparked a relief rally. They lost money for the first time since going public, but the market was preparing itself for a miss. Tomorrow, Morgan Stanley will post its earnings.

In two hours, the FOMC will release its statement. Consensus is that they will lower the Fed Funds rate to .5% from 1%. That cut gets us very close to an interest rate of zero. Analysts will be listening for the Fed’s next course of action. The interest rate weapon is out of bullets and most economists feel that they will print money to fight deflation.

I am trying to temper my bearishness, but the long-term outlook is very dire. I can’t go long this market because I have no staying power. As soon as I take a bullish position and the market declines, I want to bail because I feel I’m on the wrong side. Consequently, I am selling out of the money puts and I am selling that credit spreads to distance myself. My biggest hope is that we have a massive year-end rally that spills into January. If this scenario plays out, I will make money on my put writing and I will be ready to establish short positions.

There is a strong bid at SPY 85 and seasonal bullishness will keep it intact. Resistance is mounting at SPY 90, but I believe that level can be broken. If that happens, the market will rally to SPY 100. I don’t believe it will gain enough momentum to break through that level by year-end.

The Fed is likely to tell the market what it wants to hear and I feel that a rally is more likely than a decline. If you play it, go light and stick with commodity stocks. The better play is to sell out of the money puts on stocks with strong support levels ahead of the announcement. 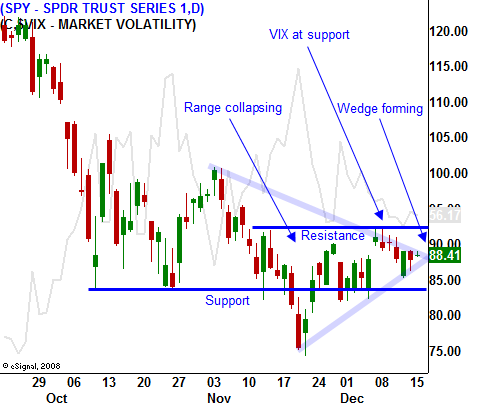