Yesterday, the market rallied in response to the FOMC statement. The Fed made it clear that interest rates are not their only weapon. They set a target range for the Fed Funds rate from 0% to .25% and they plan to keep the rates low for a sustained period of time. They also said that the Fed would buy securities of all types. Translation: they are going to print money.

Rick Santelli (CNBC) is an excellent reporter and he made a great point this morning. Over the course of many years $20 trillion (random number) of artificial wealth has been created through bad lending decisions and consumption. Now that the $20 trillion of wealth is being squeezed out by the market, bank officials want to inflate us back to that peak. That is like recalibrating the thermometer because you don’t like the temperature. Unfortunately, the dollar will be worth less and our standard of living will decline no matter what we do.

Politicians and banking officials are deathly afraid that Americans can’t take pain. If the solution to this problem is to print money, why haven’t we done it before? Why even bother going to work when we can just print money?

This is not a solution. The Fed wants to fend off deflation because people will curb consumption. When they feel that prices will drift lower over time, they postpone purchases. This belt tightening is exactly what needs to happen. It means that Americans will be living within their means and the savings rate will rise. Inefficient companies will cease to exist and overtime, the strong will survive. Unfortunately, those who lived beyond their means will suffer the most.

The Fed Funds rate is as low as it’s ever been and the Fed is buying mortgages at 4.5%. This stimulus will barely help. Banks are worried about rising unemployment and defaults. They don’t want to lend the money out (at this level). However, if they charged higher rates of interest, at some point they will be eager to loan money. Consumers don’t want to borrow money. More than half of all Americans feel that their job is in jeopardy. Furthermore, their portfolios have been decimated and one in six mortgages is underwater. Lower mortgage rates sound like a solution. Unfortunately, anyone that could possibly qualify for a home (and masses of people who couldn’t) is under roof. If anything, people that were never in a position to own a home need to be driven out. There aren’t any people left to buy homes.

The lower mortgage rates will help some people reduce their monthly payments. However, this will simply keep them in their house and hopefully they will be able to afford their new payment structure. As the unemployment rate climbs, it might also keep the subprime crisis from spreading to prime loans.

This whole concept of printing money will create a new series of unintended consequences. As the dollar plummets, inflation will spike and interest rates will rise.

The market tried to break out above resistance at SPY 91 yesterday. After a weak opening, prices have firmed up. I feel that we might see follow-through this afternoon. The market is near the upper end of its one-month range and if it breaks out, option expiration related by programs will fuel it higher. That in turn could spark a round of short covering.

I like selling out of the money puts on strong stocks. Gold and commodities stocks look particularly strong at this juncture. If the market closes higher today, we are likely to test resistance at SPY 100 in the next few days.

I am hoping for a monster year-end rally so that I can short with confidence. 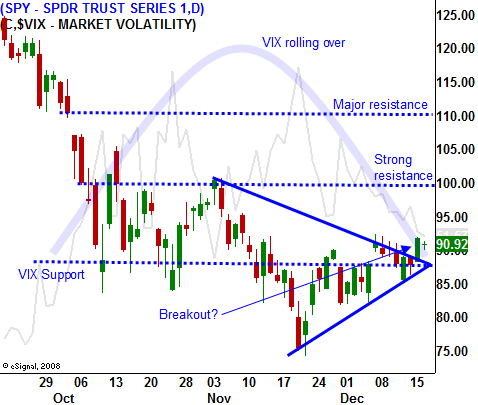