Today’s Market Performance Will Signal The Direction For 2009!

I will be hosting a live web event tonight and I hope you can make it.

Yesterday, the market was not able to add to last week’s Santa Claus rally. Prices opened higher and gradually gave back those gains after weak economic numbers were released. In previous weeks, the market has been able to shrug off bad economic data.

This morning, the market is down sharply on a weaker than expected ADP employment report. It showed that almost 700,000 jobs were lost in the private sector in the month of December. That was up sharply from 476,000 jobs in November. ADP has been known to under estimate unemployment and the recently changed the way they calculate their number. That might have accounted for part of the jump. Challenger, Gray & Christmas, show that planned layoffs increased 275% last year. The outplacement firm expects that to continue for at least another six months.

All eyes are once again focused on Friday’s Unemployment Report. Last month’s number was dismal; however the market took the number stride. I am expecting a very weak number. If the market continues to sell off today and tomorrow, the damage on Friday will be minimal. Once the initial shock wears off, I believe the market will regain its footing.

In the last few days we have seen a nice bid to the market. The advance/decline line has been strong and the breath to the rally has been good. The differential between US Treasuries and junk bonds (credit spread) has been narrowing and that is a good sign. It shows that investors are willing to take on more risk.

A few months ago, the market was concerned that our financial system could collapse. Those fears have been pacified by the Fed’s actions and euphoria surrounds President-elect Obama’s inauguration. An estimated $8.9 trillion is sitting on the sidelines and investors are waiting to place money. In the short-term, I believe the forces on both sides are strong and we will chop around.

This is the fifth trading day in January and it is statistically significant. The first five trading days of the New Year have an 86% probability of predicting how the market will fare the rest of the year. We started off at SPY 90 and we broke above horizontal resistance at SPY 92. Just when it looked like we were off to the races, the momentum stalled. As I mentioned in yesterday’s report, it was critical for the 92 level to hold. The market needed to show strong follow-through if it was going to challenge SPY 100. Instead, investors are wondering if this was simply another head fake. In the chart, you can see that an uptrend line has formed. It rests at SPY 90. If the market breaks SPY 90 today it will not bode well in the short or long term. In the long term, the first 5 days of the New Year will post a loss. In the short term, the uptrend line will be breached.

I’ve been warning you to be cautious on long positions for exactly this reason. You are trading from the wrong side of the market. The long-term trend is down and many problems will weigh on the market for years to come. That’s why the best strategy is to sell out of the money puts. If the market rallies and then gives back those gains, this strategy makes money because time has elapsed and implied volatilities have declined.

The bulls and the bears will battle it out today. After a nice rally, the market looks tired and I would favor the downside ahead of the Unemployment Report. I mentioned yesterday to exit long positions if SPY breaks below 92. If you have been selling naked puts on energy and commodity stocks, you have nice profits and you can wait to see if SPY 90 holds. I would only day trade the short side using stock and I would focus on the top 10 shorts on the bearish watch list. Focus on retail, restaurants and REITs. I believe we will see an early rally this afternoon and a decline into the bell. Wait for that rally and then establish your day trading shorts. 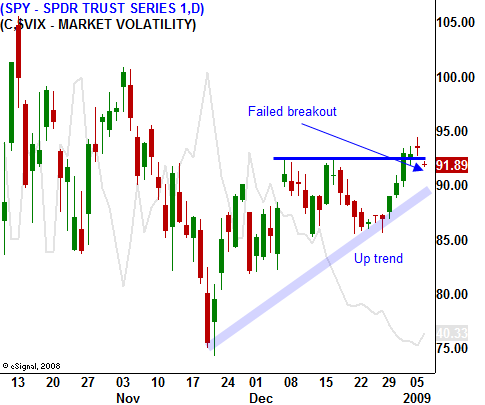