Financial Woes Weigh On The Market and the Inauguration!

So much for the thought that Obama’s inauguration would provide a small rally. Americans have a tremendous amount of optimism and I have never witnessed this level of excitement. I hope that we can bottle this energy for future use. If Obama is to succeed, he will need the help of every American.

We need to work harder for less and save money. Every American has to take responsibility for their own actions and they need to stop looking to the government for help. The president needs to stabilize the financial system and cut spending. Unfortunately, the plan is to spend our way out of this crisis.

Financial stocks continue to weigh on the market. Even though Barclays said they will hit their number, the stock has fallen from $12-$5 in the last two days. This morning, Regions Financial reported an unexpected $6 billion write-down. This regional bank services the South and it appears that the credit crisis has spread to regional banks. PNC services the rust belt and they received $8B in aid from the Treasury last week. The stock has been halved in the last five days. Many regional banks announce earnings this week and these events serve as a warning shot. Analysts have been expecting regional banks to hold up better because they have not been as aggressive in their lending practices relative to large banks. Consequently, they have further to fall.

Asia and Europe traded lower and that set up a negative backdrop. The SPY has broken below horizontal support at 85. The momentum is clearly lower and the VIX is moving higher. Worst case scenarios are priced into the financial sector, but regional banks have been holding up relatively well during the last six months. If they start taking big write-downs this quarter, the market could test the November lows (SPY 75) in the next two weeks.

Earnings season will be in full swing in a few days and we will get a feel for every sector. The current quarter will be dismal and that is already priced in. The guidance will be the key. Many firms have stopped giving guidance due to uncertainty. I expect that trend to continue and it will further decrease transparency. This will also weigh on the market. In times of uncertainty, traders shoot first and ask questions later.

From a longer-term trading perspective, I am sitting in cash. As the market continues to fall, the implied volatilities are climbing. Once the market finds support, I will write out of the money put credit spreads and I will sell naked puts on stocks I like. The commodity sector has some attractive opportunities. In particular, I like energy and agriculture.

Only short-term traders should engage the current market. I like shorting bearish stocks that appear at the top of the Live Update table. Cover your positions before the close and use stops. Today, I am expecting a rally after Obama’s inauguration. Once that rally subsides, we will see selling into the close. The A/D is a negative1:6 and the selling is broad-based. 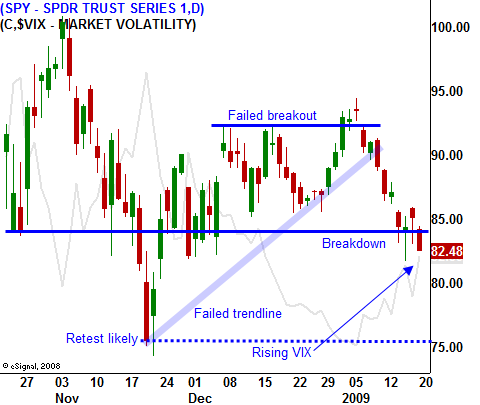