Yesterday, the market quickly erased any momentum that was gained from the four-day rally. A weaker than expected initial jobless claims number and a weak durable goods number contributed to the decline. The earnings releases Wednesday afternoon and Thursday morning were also negative. Once the market set its path Thursday morning, the selling pressure continued throughout the day.

This morning, a better than expected GDP number raised early hopes. However, most analysts expect that the revisions will knock it down substantially in the coming months. A drop of 5% was expected for the fourth quarter and it shrank by 3.8%. Consumers cut durable goods purchases by 22.4% in Q4. Businesses cut capital expenditures by 27.8%, the most since 1958. The only good news is that prices dropped by 5.5%, a dramatic turnaround from the 5% growth rate last year. Excluding food and energy, prices inched up .6%.

In the year 2000, our national debt was $4 trillion. This year alone we are talking about $2 trillion allocated to bank bailouts and $1 trillion in stimulus. In its first 225 years our country had $4 trillion in debt and in less than a decade we have tripled that level. This is absolutely ridiculous. Bonds will get crushed along with the dollar and the cost of capital will increase dramatically as US Treasuries go to auction. We haven’t even talked about the massive amounts of money states need to bail them out. California is running a $9 billion deficit and it will be out of money Monday. Illinois is at a $4 billion deficit.

President Obama proposes to increase Medicare and Medicaid to an additional 10 million Americans. That bill has not been factored in anywhere and if we estimate $2000 per person per year, that is another $20 billion in spending. Who in the heck is going to lend us this money?

A month ago Standard & Poor’s warned that the US could lose its AAA bond rating. This spending reminds me of a person who is going to go bankrupt and goes on one last monster spending spree.

Today Obama announced his support for unions. Every American deserves to make as much as they possibly can. However, every corporation has the right to move their business anywhere else in the world. If corporations are burden with new labor rules and regulations, they will move their operations overseas. They don’t want to be held over a barrel by unions who threaten to strike. Why would any corporation subject itself to these conditions? We have the second highest global tax rate, extreme health insurance costs, OSHA, EPA and Sarbanes-Oxley as obstacles for US corporations. For those companies (i.e. Exxon) that are fortunate enough to make a profit, you run the risk of a windfall profit tax.

I completely disagree with the philosophy that money needs to be put in the hands of the individual to stimulate the economy. That simply results in consumption. We need to create incentives for businesses to reinvest. As they do so, they will hire workers. Corporations are flush with cash but they don’t want to reinvest in the US. Even the Big Three are making huge profits overseas, but they are reinvesting those profits overseas. They want the government to fund the crappy US operations. I have recently viewed a video of a Ford plant in Brazil.. Ford tried to do the same in the US and the unions shot down.

The shallow bounce after a sizable decline indicates that more selling is just around the corner. We have fallen below support at SPY 85 and the market should test support at SPY 80 before the Unemployment Report next week. If that level fails, buy in any short put positions.

There are many earnings and economic releases due out next week. It’s all about jobs at this stage. Wednesday the ADP employment index will be released and Thursday the initial jobless claims number will be released. Traders will try to gauge Friday’s number based on these figures.

Decliners outnumber advancers by 2:1. The momentum favors the bears, but the selling today does not feel a strong as it did yesterday. I believe the downside could be contained to the intraday low of SPY 83. The market would do well to maintain SPY 80 next week. 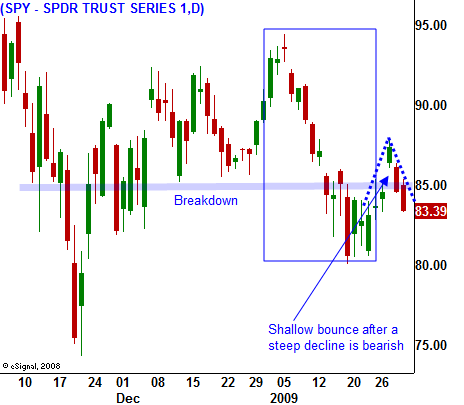