Look For Late Afternoon Selling – The Market Is Tired!

Monday, we saw tremendous support for the Treasury’s toxic asset plan. The market was able to rally through major resistance at SPY 81. In the last two weeks it has rallied 25%. Yesterday, the market tried to add to those gains, but sellers push prices lower into the closing bell. It will be critical for the market to stay above SPY 81 this week since that would validate the breakout.

Let’s backtrack for a minute and visit the events that got us here. China posted its third consecutive gain in PMI. I don’t trust their figures and they can manipulate them to reflect any growth they desire. Their stimulus plan has doubled and I believe it will help their economy. However, I don’t believe one country can pull the world of an economic disaster.

Banks stated that the first two months of the year have been profitable (excluding write-downs). Citigroup posted operating profits of $8.3 billion. Unfortunately, it has $350 billion in toxic assets and it owes taxpayers $45 billion. Banking issues are far from over. The differential between the borrowing and lending rate has never been better, yet it will take many years for banks to claw their way out of a deep canyon.

The Fed and the Treasury are throwing around trillion dollar figures like it was child’s play. The new toxic asset program could require $1 trillion in financing. It is also using the Federal Reserve’s emergency lending powers to leverage the debt equity ratio as high as 6:1. Isn’t leverage what got us here in the first place? Our national debt has grown over 200% in the last eight years (from $4 trillion to $12 trillion). It is projected to grow by another $1 trillion each year for the next 10 years. Who is going to buy all of this debt?

A very important news item was swept under the carpet today. The UK had its first failed government bond auction since 2002 after bids fell more than $100 million pounds short of the 1.57 billion the government was trying to raise. This tells you that the appetite for government debt is reaching a saturation point. The US has barely gotten started on its financing and if it reaches this point in the near future, the Fed has stated that they would buy Treasuries to keep interest rates low. This is equivalent to printing money and it would be disastrous.

If the Fed has to step in during the early stages of the game, we won’t be able to remotely finance our bailouts and stimulus plans. The dollar will plunge and our cost of capital will skyrocket.

This morning, durable goods orders showed a nice rise. However, last month’s figures were lowered substantially. Home sales rose at the fastest pace in 10 months, but January’s numbers were revised lower. Furthermore, median home prices dropped by 18% year-over-year. While both of these economic releases showed improvement, they are still very weak.

The market has been able to rally through resistance and follow-through. Signs of economic improvement have sparked short covering and bulls are putting money to work. Bear market rallies can be fast and furious and they tend to exceed expectations. However, big problems still loom and we are far from out of the woods. Once the buying momentum slows down, bears will try to push prices back down again. I believe the “signs of improvement” are over-exaggerated and this is nothing more than a bear market rally.

Fundamental news (not government spending) will fuel the next rally. I don’t see any catalyst to drive the market higher. Once short covering runs its course, I believe we will test the downside. That decline could start this week and a close below yesterday’s low (SPY 80.80) would be bearish. With next week’s Unemployment Report drawing closer, the selling pressure will mount.

I am selling out of the money call spreads today on weak stocks that have bounced and are still below a major resistance level. Late yesterday, sellers pushed the market lower. After an initial rally, prices are starting to falter and I believe we will see another decline late this afternoon. 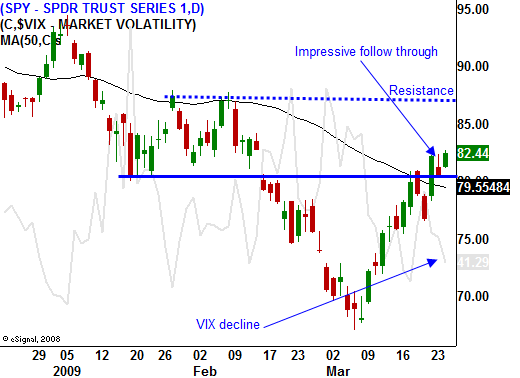