The Bulls Dodged A Major Bullet – Buyers Continue To Step Up!

Yesterday morning, the market tried to stage a nice rally out of the gate. Better-than-expected durable goods orders and a rise in new home sales sparked the rally.

A closer look at the numbers still caused concern. Durable goods orders were still at a very low level and January’s numbers were revised sharply lower. New home sales increased, but they have simply improved from the worst conditions ever. Furthermore, January’s new home sales were revised downward and median prices fell 18% year-over-year.

As I mentioned in yesterday’s comments, the most significant event was barely mentioned. England held a $1.7 billion pound bond auction and it was under subscribed by $100 million pounds. This shows that the appetite for government debt is reaching a saturation point. Many governments are just starting to issue bonds so that they can finance their bailouts and stimulus packages. If this is a sign of what’s to come, it could weigh heavily on our plans to issue almost $2 trillion worth of debt this year. Our bond auction went fairly well, but we are just getting started.

By late afternoon, the market gave up early gains and it reversed downward. The decline was starting to gain momentum and it looked like we would close on the low of the day. The market would have also closed below critical support at SPY 81. In the waning minutes of trading, bulls stepped in and supported the market. This extreme intraday volatility indicates that we have reached a temporary equilibrium point. Buyers and sellers are active at this price level. Within the next few days, we will find out which side has the stronger hand.

This morning, earnings from Best Buy and other retailers came in better-than-expected. Tech stocks also showed early strength and the market embraced yesterday’s late day rally. Fundamental news in the form of good earnings would provide a much-needed catalyst for this market rebound. However, the earnings news came from a small sampling of stocks. Best Buy for one has benefited from Circuit City’s demise.

Economic conditions continue to deteriorate and GDP shrank by 6.3% in the last quarter of 2008. This was the worst showing in 25 years. Analysts had been expecting an even sharper 6.5% annualized decline. For the current quarter, economists believe that GDP will decline 5% to 6%. Initial jobless claims rose to a seasonally adjusted 652,000. Continuing claims jumped to 5.56 million, much higher than economists projected (5.48 million). This was the ninth consecutive record high. In the face of poor economic news, the market has been able to forge ahead.

Advancing issues outnumber declining issues by 2 to 1 and the early rally seems to have staying power. In today’s chart you can see that a battle between bulls and bears has emerged. Last Thursday and Friday the market pulled back and Monday it reversed those losses and established a new short-term high. Yesterday, we had tremendous intraday volatility with action on both sides.

I would normally try to guess which way the market is heading. Unfortunately, there is not a clear-cut answer. We are in a long-term downtrend and playing bear market rallies is a dangerous business since they can exceed expectations. The good news that has fueled this rally hasn’t been that great and I feel that short covering (not investing) has accounted for much of the move. The market was deeply oversold and after a 25% rally from the lows, it has almost reached an overbought state.

My best advice is to watch what happens over the next few days. End of month/beginning of month fund buying will support the market. This is also the end of the quarter and we are seeing some window dressing. This influence should play out by Monday or Tuesday and then I feel that bears will try to short ahead of the Unemployment Report.

Stick to trading relative strength and relative weakness. Being in the right stocks will provide a cushion if you get caught on the wrong side of the market. I like commodity stocks and some retailers on the long side and I like defense stocks on the short side. Sell out of the money spreads and keep your distance from the action until we can figure out which way the market is headed. Yesterday, I thought that we would break below SPY 81 and that that would fuel more selling. The closing rally changed my opinion slightly and I feel support will hold through Monday. The call credit spreads by established yesterday are still a very safe distance from harm. Today, I will balance my risk by selling some out of the money put spreads on commodity and retail stocks. 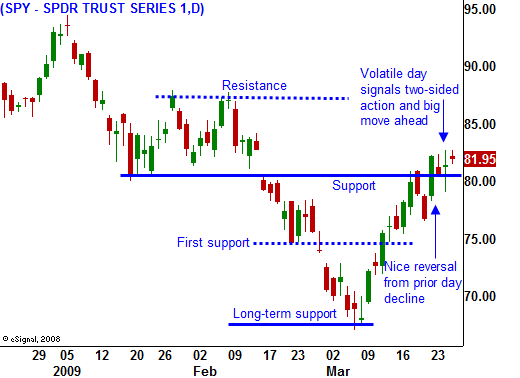