Look For Nervous Trading and Support At SPY 75 This Week!

Last week, the market was able to continue its rally. Wednesday, the NASDAQ briefly popped into positive territory for the year! Investors were focusing on the positive aspects from each news release.

As I mentioned, the good news was over-exaggerated. Let’s start with China since it kicked everything off three weeks ago. The Nikkei and Hang Seng were down almost 5% overnight. Japan’s industrial output slid for the fifth straight month and that weighed on investors. North Korea is testing nuclear weapons and US battleships are making their presence felt. While these do not directly involve China, it shows that obstacles surround the most promising economy. I also question how honest China is in reporting its growth numbers are and I doubt that one country can pull the entire world of a global crisis.

New home sales were up for the month from the lowest levels ever. Somehow that was interpreted as a bottom in the housing market. Last week’s figure also showed that home prices fell by 18% year-over-year and that was swept under the carpet. Tomorrow by the Case-Schiller Home Price Index should reflect declining home prices.

Last Thursday, we got a spattering of good earnings news from the retail sector and that provided follow through for the rally. In particular, Best Buy posted big numbers, but the demise of Circuit City (not an increase in consumer electronic demand) boosted earnings.

This morning, Obama addressed the future of Chrysler and General Motors. Chrysler needs to come to terms with Fiat in the next 30 days to receive $6 billion in government aid. General Motors needs to make much larger concessions to get additional government aid. GM’s CEO was did not do enough and he was asked to resign. If the carmakers can comply, the government will guarantee parts and service on their cars even if they go into bankruptcy.

This week will be filled with economic releases. Chicago PMI, ADP employment index, ISM manufacturing, initial jobless claims, factory orders and ISM services. However, none will be larger than Friday’s Unemployment Report. In previous weeks, initial jobless claims have been creeping higher and I expect a bad number. Continuing unemployment claims are well over 5.5 million – the highest ever. The market is likely to decline ahead of the number and worst-case scenarios will be factored in. In the last four months, the market has not declined after the release of the Unemployment Report.

Last week I thought the market would be able to hold its own through today on end-of-month fund buying, but I have been forecasting weakness the rest of the week. It is likely that we will test support at SPY 75 this week. I believe that level will hold and it will represent a higher low. That is constructive for the bulls and it could set up a nice buying opportunity. I will continue to focus on naked put writing since that strategy has produced great results. Commodity stocks are pulling back and I want to see support levels hold before I pull the trigger. For a quick downside play, I would look to defense stocks.

The early momentum is down and the advance/decline is a negative 1:10. The market has been able to hold this level all morning and I think most of the damage is done. The General Motors/Chrysler news should not have come as any surprise. Prices are likely to leak lower this afternoon. Look for continued weakness through Thursday as economic numbers weigh on the market.
Get your bullish stocks ready and be prepared to sell naked puts and bullish put spreads on support at SPY 75. 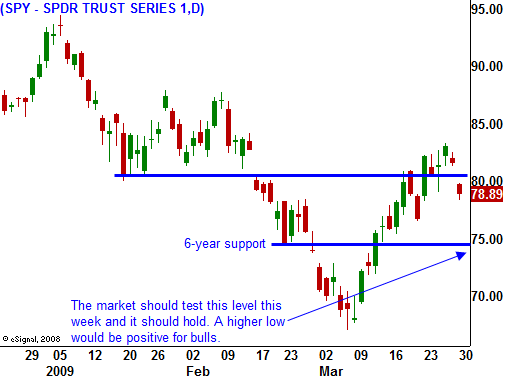