Look For Thge Rally To Continue This Week – Then Get Defensive!

Last week, the market staged a nice breakout to a new relative high. That momentum was largely generated by an early earnings release from Wells Fargo. Although all of the details are not known, they expect to show a net income of $3 billion in Q1.

That is exactly the type of news the market can sink its teeth into. The financial sector has been the greatest area of concern and if conditions are improving, it could spark a major short covering rally.

The Fed and Treasury have provided a bullish backdrop for a financial recovery and their actions are taking root. Bulls have discounted economic releases on the notion that they do not reflect current conditions. Before tomorrow’s open, we will get PPI and retail sales. Investors are not very worried about inflation so that number won’t have much of an impact. Analysts keep pointing to improving retail sales and that could be a catalyst. After department stores released their March results last week, the market rallied. Personally, I didn’t think the performance was that great, but I won’t stand in the way of this rally. The retail sector has been very strong the last few weeks.

Earnings will be the focal point this week. Goldman Sachs has a history of beating expectations and they release before the open tomorrow. It is the best run financial institution in the world and this could provide another spark. J&J also releases earnings tomorrow morning and they are the largest diversified healthcare supplier in the nation. Health care stocks have been beaten down on healthcare reform worries. Today, ESRX announced that they are acquiring the prescription drug division from WLP. The backdrop for healthcare stocks is positive heading into the number and that could generate a good reaction to J&J’s results tomorrow. Year-over-year net income is expected to be down slightly, but the performance will still be very respectable.

After tomorrow’s close, we will hear from Intel and CSX. Semi conductor sales have been down globally and dismal expectations are built in. If anything, there might be a slight chance for an upside surprise if the guidance is positive. CSX will reveal the strength (weakness) in rail transportation. The numbers will be down from last year, but any signs of a pickup will go a long way. Rail stocks are moving higher off of a solid base.

The SPY is above resistance and it is above the 100-day moving average. We are likely to see option expiration buy programs and that could fuel short covering throughout the week.

There will be many economic releases (PPI, Retail Sales, CPI, Empire Manufacturing, Industrial Production, the Beige Book, Initial Claims, Philadelphia Fed, and Consumer Sentiment) but all eyes will be on earnings.

Thursday, we will hear from J.P. Morgan and I’m expecting a good number. After the close, Google will announce and that is likely to set the tone for tech. Friday, Citigroup and General Electric announced. I believe GE will post solid results, but Citigroup scares me. Much of their profits during the first two months came from AIG payments that it had already written off. They said that March was not as strong and the expectations are fairly high.

I believe we’ll see a market rally into Thursday. After that, it gets a little dicey. The market has come a long way in a short period of time and I don’t believe bulls will get the improvement in Q2 guidance they are looking for. CEOs are likely to maintain a cautious outlook and they will error on the conservative side.
If we get a big rally this week, I will consider selling call credit spreads next week. For now, favor the bullish side and sell puts during today’s decline. I believe the market will rebound into the close and that will set a positive tone for the rest of the week. 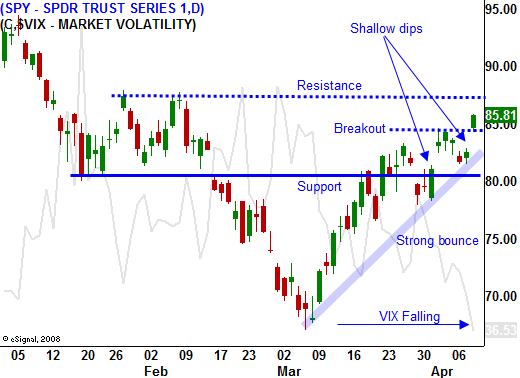