A Decline In Retail Sales Is Weighing On The Market – Rally Could Stall Late In The Week!

Yesterday, the market recovered from its early lows and it staged a nice rally into the close. The bullish momentum is strong and that’s what I expected to see.

Goldman Sachs released better than expected earnings. The stock is trading lower because they plan to raise $5 billion in a secondary stock offering. They will use the proceeds to pay back the $10 billion they took from TARP. I see this as a positive sign. Financial institutions are fed up with the government’s involvement and those that can afford to want to pay back the TRAP loan.

Johnson & Johnson posted solid numbers and the stock is trading higher. They did not provide guidance and that is keeping a lid on the shares today.

After the bell, we will hear from Intel. It will set the tone for the entire tech sector. Chip sales have been soft and dismal results are expected. Any glimmer of hope will be magnified by the bulls. CSX will also release after the close and traders will be looking for signs of improvement in rail transportation.

The PPI came in lower than expected and that is a good sign. In order for interest rates to stay low, inflation has to be kept in check. Retail sales dropped 1.1% in March and that is weighing on the market. Retail stocks have bounced sharply off of their lows and traders expected decent results after two consecutive months of growth.

The market has bounced nicely from its lows a month ago. There is room for disappointment as earnings are released. However, I believe we will get through this week in good shape. The chance for option expiration buy programs exists and we could see a short covering rally.

Decliners outnumber advancers by a 3:2 ratio. Trading is rather quiet and I don’t believe we will see a major move today. Late in the day we could see the market recover if the bears can’t establish a new low for the day. I have been selling puts and I currently have a full position. Friday, I believe we could see the market stall. It is a little ahead of itself and if earnings are coming out light, some of the recent optimism will fizzle.

Corporations are reluctant to give guidance and those that do will error on the conservative side. I am looking for stocks that have hit resistance and I am preparing to sell out of the money call spreads perhaps as early as Friday.

If the market finds its footing and it starts to grind higher before then, we could see a nice rally just like the one yesterday. Buy programs will kick in and the move will it feed on itself. Look to take bullish profits as the week unwinds. 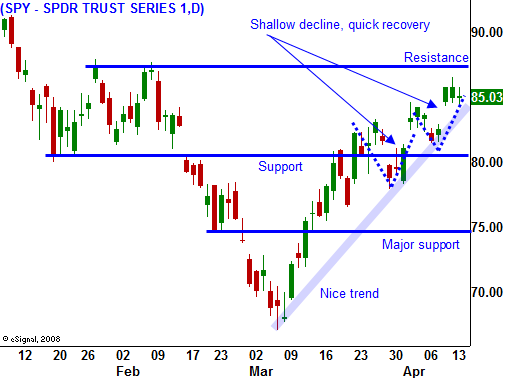