The Market Wants To Run – We May Not See Much of a Pullback!

All of my analysis told me we would see a nice rally yesterday. Prices pulled back slightly near the close but most of the gains held. Bears should fail to push the market lower and by early afternoon, I expect another rally.

The momentum clearly favors the bulls. Every time the market has pulled back, it rebounds quickly and it establishes a new relative high. The only “fly in the ointment” is the resistance right at this level. This was the high from February. Above that we have resistance at SPY 92. That was the peak at year end. I am hearing many analysts call for a pullback next week and I am starting to doubt my forecast for the same.

I felt that banks had rallied far enough off of their lows that earnings disappointments could materialize next week. As the actual results are posted, they are much better than expected. Stability in the financial sector could fuel a major rally since that’s where the problems started.

This morning, Citigroup posted an $.18 loss when analysts had expected a loss of $.34. Their Tier 1 ratio is down to 11.8% and they have greatly reduced their leverage. Yesterday, we learned that JP Morgan’s Tier 1 ratio was down to 9%. The risks are much lower than they were a few months ago. This morning, BBT (the largest bank in the Southeast) announced a $.48 profit when analysts had expected $.32. General Electric posted earnings and they beat by a nickel. Most importantly, GE Capital made $1.1 billion in the quarter.

Banks are preannouncing and they want to calm investors. Last week, Wells Fargo sparked a huge rally when they preannounced results. Yesterday, Regions Financial preannounced that they expect to make a profit and “the street” was expecting a $.42 loss.

Bank of America will get things started Monday morning. The rest of the week will be filled with announcements from other financial institutions. This week we also learned that Goldman Sachs and First Niagara were able to raise capital. Private equity is starting to flow back into banks. The spread between the borrowing and lending rate has never been higher and banks should be making money hand over fist. Analysts have greatly reduced expectations and the results are coming in above estimates.

The more I hear talk of a pullback, the less likely it is to happen. Asset Managers are waiting to “buy the dip” and they may not get the chance. Every time the market has declined, it snaps right back. If we do get a pullback next week, I expect it to be very brief.

Yesterday, initial jobless claims dropped by more than 50,000 and this marks the second consecutive weekly decline. It is still too early to say that unemployment is stabilizing, but it does provide the bulls with ammunition. This morning, consumer confidence rose to 61.9 (up from 57.3 in March) and that is the highest reading since September.

The VIX continues to decline as conditions stabilize. Traders do not want to go home short over the weekend and we have typically seen a rally into Friday’s close.

The bulls have the momentum and shorts are starting to get nervous. Yesterday, I said that I will be eyeing up call credit spreads this afternoon. While I am still looking for candidates, I don’t believe I will be initiating positions. I am more likely to sell put spreads. If we do get a market pullback, these trades should be safe and I might even consider buying calls at that juncture. The market has run up from a deeply oversold condition and many consider it overbought at this juncture. However, if you look at the 40% decline last year, we still have room to run. The next leg up would spark a huge short covering rally.

I don’t want to sound overly bullish because I believe these problems will take years to resolve. However, there is a short-term buying opportunity.
Overseas markets were positive and advancers led decliners by 3 to 2. We will see another rally today and a strong close. Short-term traders should focus on stocks at the top of the Live Update table in the Daily Report. Take some profits before the close. 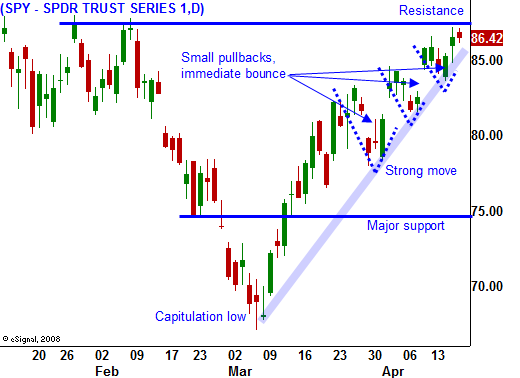