The Market Looks Strong – Earnings Are Setting Up For A Rally Thursday!

Yesterday, the market was able to recover from Monday’s nasty slide. It rallied throughout the day and it closed near its highs.

Overnight, earnings news weighed on the market and the S&P futures opened 10 points lower. As I suspected, the reaction to earnings after the close and before the open was negative. However, buyers quickly stepped in and they rallied the market into positive territory. Currently, advancers led decliners by more than 2 to 1.

Bearish comments from Bank of America, Morgan Stanley, General Electric and Treasury Secretary Geithner did not discourage investors. Capital One posted a loss of $.45 per share and they expect credit card defaults to rise to 10% this year. That news comes as Congress is trying to clamp down on credit card lending practices.

Early indications are that banks hold the upper hand in this confrontation. This is another example of why we don’t want the government running our banks. Excess credit is what started this whole problem and now politicians want banks to lower rates. The problem is not that banks are charging too much interest. They assess the credit risk and they determined a rate where they can be profitable given the risks. The problem is that people are borrowing money beyond their means. If regulators imposed ceilings on credit card interest rates, many consumers won’t be able to get loans because the risks to the issuer will outweigh the rewards. To think that low lending rates will result for everyone is foolish. As an unintended consequence, the government will determine who should get loans and who should not.

Banks are taking all of the blame for our woes and consumers/homebuyers are just as much at fault. Our own government continues to spend beyond its means and it has been setting a horrible example for states and municipalities. A monumental debt problem can only be solved through saving over a long period of time. I have not heard this solution being tabled.

Regardless, the market wants to move higher. Every dip has been short-lived and buyers immediately step in. I believe the earnings releases this afternoon and tomorrow morning will be positive and the market will be able to stage another rally.

We will hear from Apple, eBay, F5 Networks, QUALCOMM and VM Ware. With the exception of eBay, I expect all of those results to be positive and that will fuel the tech sector. Tomorrow morning, Black & Decker, Bunge, CME, National Oil Well, Potash and UPS will announce. I am also expecting decent results from this group.

The only economic news of mention this week is the initial jobless claims tomorrow. It has decreased 2 consecutive weeks and any improvement might be construed as a trend. I believe all of the news combined sets up for a positive day.

I have been selling out of the money put spreads and many of the positions are already doing well. I am avoiding energy stocks for now. High oil inventories need to be worked off. Retail and tech have been my favorite sectors. Distance yourself from the action by selling one or two strikes out of the money.

Today’s rally has stalled, but I believe it will grind higher into the close. I would prefer not to see Apple rally much more today. I don’t want it to set up for disappointment. Money is flowing back into the market at a gradual pace and Asset Managers don’t want to miss the boat. They are buying stocks with the idea that they may not get a big pullback from here. By the same token, they won’t chase stocks either. 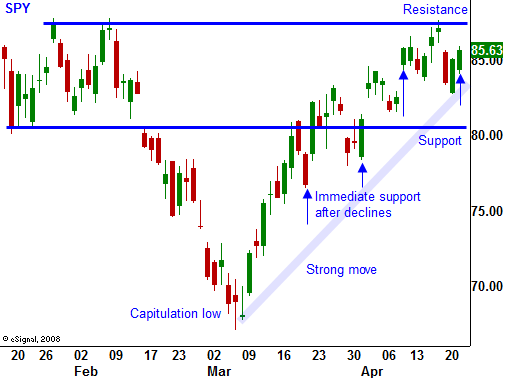