We Did Not Get The Rally I Expected and It’s Time To Get Defensive!

This week, the market started off on a bad note. Over the weekend, statements by government officials led investors to believe that TARP loans would be converted into common stock. That sparked a quick round of profit-taking. The government would become the largest shareholder and that would be one step away from nationalizing banks.

Bank of America released better-than-expected results, but 86% of the profits came from Merrill Lynch. CEO (Ken Lewis) said that the credit crisis will continue to worsen and he did not offer any guidance on when it might bottom.

Morgan Stanley missed its number on trading losses. Capital One lost money on credit card defaults and they expect defaults to rise to 10% this year. Congress is trying to impose new regulations on credit card interest rate policies.

After the steep decline on Monday, the market was able to regain its footing. The earnings have generally met lowered expectations. Most CEOs are not offering guidance in this uncertain business environment and the transparency is poor.

Apple provided a nice early morning rally after beating earnings estimates. However, the market has reversed and it feels very heavy. That could in part be due to the big miss by UPS this morning. That shipper is viewed as a barometer of economic activity and earnings fell by more than 55%. They don’t believe an economic recovery will start until 2010.

Tonight, we will hear from AMZN, MSFT, KLAC and WDC. These stocks have all rallied nicely and I feel we are set up for profit-taking tomorrow.

I expected better market performance after the first few days of earnings releases this week. The market has given back much of its gains late in the trading day this week and that has me concerned. Each decline during the last few weeks has been brief and the market has quickly rebounded. This time around, the market is struggling to get back to resistance at SPY 87.

This morning, initial jobless claims rose by 27,000 to a seasonally adjusted 640,000. In the prior two weeks, we have seen a decline in jobless claims and a better number could have signaled a temporary pause. Continuing claims increased to 6.14 million.

Almost 25% of the stocks in the S&P 500 will have reported earnings after this week. The market has a pretty good feel for what to expect. Next week, consumer confidence, GDP, the FOMC, initial claims, personal income, Chicago PMI, factory orders and ISM manufacturing will be released. Bulls have argued that economic releases are backward looking and they don’t reflect current conditions. However, judging from the corporate guidance this week, corporations are not looking for a turnaround anytime soon and bulls might be too optimistic.

Uncertainty will weigh on the market. Traders don’t know if the government will convert TARP loans to common stock. They are also waiting to hear about the “stress test” parameters. In two weeks, we will learn which banks passed and which ones failed. That news has traders very nervous. Also, 2-year interest rates have climbed back up to the point where the Fed revealed its plan to buy US Treasuries. That means that the printing presses could get turned on much sooner than expected. We need to watch the bond auctions carefully and this is also a bearish sign.

I’m not feeling the same level of excitement that we had last week and the market is a bit overextended. I believe we will pull back next week and the selling might start tomorrow afternoon. We are likely to fall into a trading range during the next few months and we can expect choppy action while things get sorted out. The best approach is to sell out of the money put spreads on strong stocks and to sell out of the money call spreads on weak stocks. That will be my strategy during the next month or two. 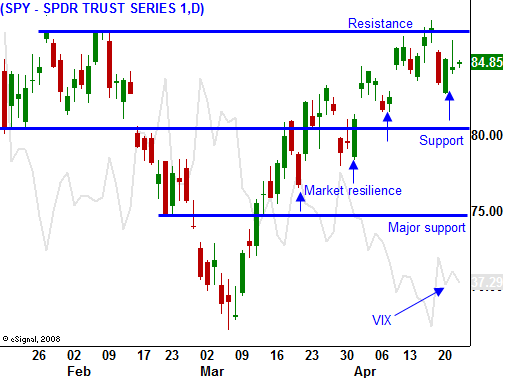