A New 3-Month High – The Bulls Have Taken Control – FOMC Will Add Fuel!

This week, the market was able to disregard the threat of Swine Flu even before its impact could be measured. Buyers have stepped in and they do not want to miss the next big rally.

This morning, a horrible GDP number completely missed estimates. It fell by 6.1% when economists had expected a drop of 4.9%. From within the number, bulls latched on to a 2.2% rise in consumer spending. They also viewed a drop in inventories as good news.

Over 30% of the companies in the S&P 500 have released earnings. So far, 69% have exceeded earnings estimates. It’s important to note that analysts expected earnings to drop by 34% this quarter and the bar was set very low. Analysts are expecting Q2 earnings to be down by 33%.

Bulls feel that economic statistics are backwards looking and they are willing to discount these releases. I’m not quite as optimistic because I have not seen companies give guidance. If conditions were truly improving, we would hear comments to that effect during the conference calls.

This afternoon, the FOMC will release its statement. The last time it met, it surprised the market with a $1.3 trillion plan to buy mortgages and US Treasuries. This news immediately lowered interest rates and the market rallied. Given the weak GDP number and the threat of a pandemic, the Fed will make accommodative statements.

As I’ve said before, this rally needs to be treated with caution. Don’t lose sight of the fact that the long-term trend is down. Everyone is lined up at the punch bowl and the party is just beginning. In the not-too-distant future, we will have a massive hangover and a tremendous “bar tab” to deal with.

From the last FOMC meeting, interest rates have been creeping higher. The Fed plans to buy US Treasuries to artificially keep interest rates low. Effectively, they are printing money by doing so and the dollar will get crushed. We have barely started funding our stimulus and bailout plans. If they have to resort to this practice early in the game, it will not bode well for the market or the economy.

This week, the US Treasury successfully held auctions and most of them were oversubscribed by a factor of two. The Swine Flu outbreak helped as we saw a flight to quality.

Many economic releases stand ahead of us Thursday and Friday. Given the market’s reaction today, any bad news will be disregarded and bulls will continue to look for the silver lining.

The market has been able to easily creep up to major resistance. Sellers are losing their grip and they were not able to overpower buyers even when they had negative news on their side. SPY 87.50 represents a new three-month high and we are likely to challenge that today. Advancers outnumber decliners by a margin of 6 to 1 and the FOMC statement should push us through resistance. More significant resistance lies at SPY 90.

I don’t think we will be able to get through that level before next Tuesday. That’s when the government releases the results from its “stress test”. There are rumors that all but a few banks will not pass the test, Bank of America and Citigroup being two that won’t. The government will not want to spread fear and I believe they have been lenient in their analysis. The release should not have a negative impact on the market.

At the end of next week, the Unemployment Report will be released. It has not had a negative impact on the market in over four months. There may be nervousness ahead of the release, but that should quickly dissipate after the number.

Be short-term bullish, but remember that we are in a long-term downtrend. I still prefer to sell out of the money puts in this environment. Energy and cyclicals have both lagged and these sectors present nice put selling opportunities. Focus on stocks that have rallied after releasing earnings. 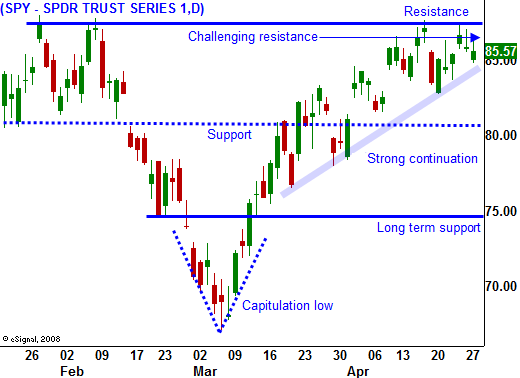