The Market Is Gathering Steam and It Is Poised To Breakout Soon!

The market is bumping up against major resistance and is taking a bit of a breather. All things considered, it has been an excellent week for bulls.

We started off with the threat of a Swine Flu pandemic. The market pulled back slightly on Monday and it quickly discounted the news. Wednesday, a horrible GDP number failed to spark selling. The S&P 500 rallied after the number and it continued higher after the FOMC statement. The Fed is going to try and keep interest rates low by buying treasuries (printing money).

Interest rates have been climbing higher and investors are demanding a higher rate of return as a huge supply of bonds hits the market. All of the stimulus and bailout plans have to be financed and interest rates and inflation will be an issue in the coming months. For now, everyone is lined up at the punch bowl and they’re not worried about the hangover or the bar bill.

Earnings have been decent and 69% of the companies have exceeded estimates. Keep in mind that earnings estimates have been lowered dramatically.

This morning, ISM manufacturing showed a slight improvement from last month. It rose to 40.1 from 36.3 in March. A reading below 50 still indicates economic contraction. Consumer confidence rose to its highest level since last September.

The government has pushed back the results of its “stress test” until next Thursday. Some traders believe that it is a sign of trouble. The theory is that many banks need time to address their contingency plans so that they can calm investor’s nerves when the results are released. From what I’ve heard, only a few of the 19 banks will fail the test. Even if it is only one or two banks, the government still has to give them time to prepare. A market decline before the release represents a buying opportunity. I don’t expect the government to unnecessarily raise fear in the financial sector.

Next week, earnings will continue to be released and we can expect good results relative to expectations. That should lend support to the market. ISM services, initial jobless claims and the Unemployment Report will be released. In the last four months, the Unemployment Report has not generated selling pressure. Bulls have been able to shrug off economic news and they are focusing on the silver lining.

The market has a great deal of momentum and it has been able to creep right up to a major resistance level. It is likely to mark time at this level, waiting for the right news. We are likely to see nervous trading ahead of next Thursday and Friday, but after that I believe we will break out.

Every dip in the market has been short-lived and this market wants to move higher. Be patient and wait for good entry points. As I mentioned yesterday, let the market come in before you get long. Today, I expect the market to work its way higher this afternoon. Advancers are outpacing decliners by a 3 to 2 margin and Fridays have been very bullish. Commodity stocks are getting hot and I like selling puts in this group. For the first time in months, I am also buying calls in very small size. This group has been dormant during the market rally and the threat of inflation has these stocks moving higher. 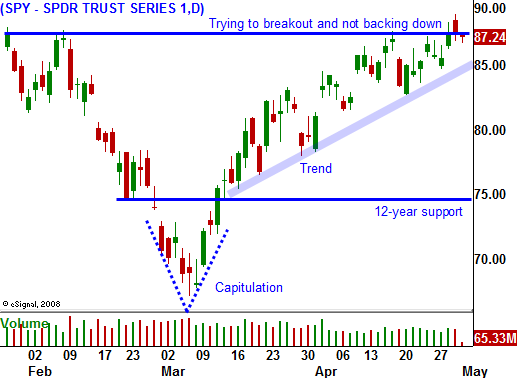