Favor The Downside For The Next Week – Sell OTM Call Spreads!

Last week, the market tried to rally through a major resistance level at SPY 94. That price point includes the 200-day moving average, a long-term downtrend and a horizontal resistance level. If bulls could have mustered one more rally, they could have sparked short covering during option expiration.

Unfortunately, that did not materialize and the bears have the ball. The market has simply run out of good news and after rallying almost 40% off of its lows it is ripe for a pullback.

Banks are stabilizing and they are returning to profitability. They have been able to raise capital in the last two weeks and the stress test provided transparency. Financial stocks have rallied dramatically and given the supply of new shares, these stocks would do well to hold their own at this price level. They are still laden with toxic assets and Bank of America and Citigroup feel that credit card default rates could rise to 23% before this cycle runs its course.

Earnings beat expectations by a large margin and that news is priced in. Analysts expected Q1 earnings to be down 33% and they expect Q2 earnings to be down 34%. Consequently, we are likely to see upward revisions since 70% of the corporations beat estimates this quarter. Many companies stopped providing earnings guidance and management is very cautious about future prospects. This needs to improve for a sustained rally to take hold.

During the recent rally, bulls have been able to shrug off current economic data. They were able to find the silver lining in every release and in some cases a disastrous number was completely dismissed as “old data”. For instance, last month retail sales were expected to rise and they dropped by 1.4%. The market disregarded the number and it staged a nice rally. Yesterday, a flat retail sales number was expected and revenues dropped .4%. This time around, we saw a sharp decline and that tells me the market is tired.

Last week’s Unemployment Report looked good on the surface. However, the government hired 60,000 census workers and that masked the true number. The unemployment rate rose to 8.9%, the highest level since 1983. Job losses in March were also revised upward by almost 35,000. We need to see the back month numbers being revised to show better employment conditions. Then, economists might get a sense that conditions are improving.

This morning, initial jobless claims increased by 32,000 to a seasonally adjusted 637,000. That was higher than expected and some of the disparity is the result of plant shutdowns in the auto industry. Continuing claims rose to a record 6.56 million. As long as Americans continue to lose jobs, the economy will not rebound.

Unfortunately, the stimulus plan is focused on social programs, not job creation. Very little is being spent on infrastructure that could increase our nation’s productivity.

The US Treasury has to sell a mountain of bonds to finance our stimulus and bailout programs. As they do so, interest rates are creeping higher. The Fed vowed to purchase $300 billion in treasuries over the next six months to keep interest rates down. They are less than two months into the program and they have already blown through $100 billion. Interest rates continue to rise and the Fed won’t be able to keep this genie in the bottle.

As the Fed buys treasuries the dollar will fall. That is inflationary and it explains why commodity stocks have performed well. This morning, the PPI came in at .3%. That was much higher than expected and inflation could be a future concern.

Stocks have rebounded sharply from their lows in March and the market lacks a catalyst. Major resistance levels and higher interest rates will keep the lid on stocks. The economic news next week is very light and earnings are starting to taper off. Retailers will be releasing their results over the next seven days and I believe that will weigh on the market. This sector has rallied substantially off of its lows and there is room for disappointment.

As the market rolls over, some of the bulls will get washed out. We should find support at SPY 83 (the 100-day moving average). In the next week, I favor selling out of the money call spreads on weak stocks that have bounced and stalled.
After two days of heavy selling this week, the market should calm down today. 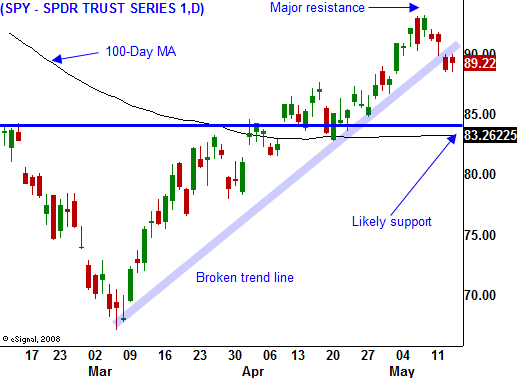