Look A Weak Open Monday With Follow Through The Rest of The Week!

A week ago, the market made a run at major resistance. The 200-day moving average, horizontal resistance and a long-term downtrend converged at SPY 94. Bulls were within striking distance of inflicting major pain on shorts if they could have mustered a small rally.

Open interest in index options favored a bullish option expiration cycle and bears could have been running for cover this week. That did not happen and the headwinds are blowing strong.

The first signs of trouble came a week ago Thursday. The government held a 30-year bond action and the results were not good (interest rates climbed). The market declined on the news and we had our first “crack in the dam”. The Fed has pledged to buy $300 billion in US Treasuries during the next six months in an attempt to keep interest rates low. In just over six weeks, they have blown through $100 billion and interest rates continue to climb. They are ahead of schedule and their actions are doing little to keep interest rates from going where they want to go.

The government will have a $2 trillion budget deficit this year and the stimulus and bailout programs need to be funded. The treasury is just getting started and as the new supply of bonds hits the market, investors will demand higher rates of return.

After a devastating decline in economic activity, the rate of deceleration is slowing. However, economic conditions are still weak. A financial collapse has been avoided, but someone still has to pay for horrible lending decisions and huge debt levels across the board (government, states, municipalities, consumers). We’ve been lined up at the punch bowl for the last two months and it’s been a great party. This summer, reality will set in as we deal with the hangover and the bar bill.

Financial institutions have rallied sharply off of their lows, but they are issuing stock like mad. This will dilute existing shareholders and these stocks will not run higher for many months. FASB rule changes have given them breathing room and now they have the latitude to hang on to toxic assets. This “junk” is like a bad trade that banks refuse to let go of. That money is tied up and it will restrict future lending.

Without question, the market was dramatically oversold in March. Investors were factoring in the possibility of a financial collapse. Once it became clear that that would not happen, stocks immediately shot higher. Legitimate buying and short covering fueled the rally. Economic data was dismissed as “old news” and momentum pushed the market higher. At this juncture, all of the good news has been priced in and we are due for a pullback.

The economic news next week is fairly light and if anything it favors the bears. A month ago retail sales dropped unexpectedly by 1.4% and the market rallied. We did not get the same reaction this week when retail sales dropped by .4%. The market declined and the upward momentum that had previously saved the day is gone.

Earnings releases will be dominated by retailers. That sector has rallied dramatically off of its lows and the stocks are priced for disappointment.

Friday’s have been very bullish and we’ve seen a rally into the close. I could discount today’s decline and blame it on option expiration volatility. However, option open interest actually favored the upside. It looks as though the market will close lower and decliners outnumber advancers by 3:2. I’m looking for a market decline next week and some of the bulls who joined the party late will get washed out.

The market should be able to find support at SPY 84, just above the 100-day moving average. I am short retail, defense and REITs. I am buying puts, and I am also selling out of the money credit spreads. Expect volatility throughout the day since it is expiration. The market should open on a weak note Monday. 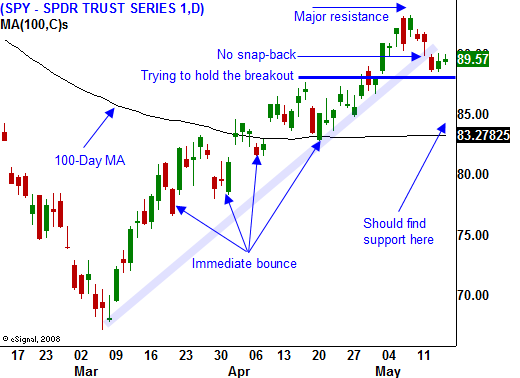