Overhead Resistance Should Keep A Lid On The Market – Light Trading Ahead!

The first week of a five-week option expiration cycle tends to be rather dull. After yesterday’s huge run-up, I don’t think we will see much action during pre-holiday trading.

News that the Communist Party was defeated in India’s recent election fueled buying in Asia and that quickly spread throughout Europe and the US yesterday. Once the momentum was established, sellers ran for cover. The rally did not seem legitimate since the volume was so light. The entire way up I noticed air pockets, indicating a lack of sellers.

The market is within striking distance of a huge resistance level. In today’s chart, you can see the downtrend line, the 200 day moving average and horizontal resistance at SPY 94. Once the market backed off from that level last week, shorts established positions and many analysts (me included) saw this as an opportunity to take profits. Yesterday’s big rally sparked some short covering.

Democracy and capitalism are great for financial markets, especially when they involve the world’s most populated country. From what I had read, the chances for a communist victory were slim and I’m surprised by the explosive move higher. Any time you see a 17% overnight jump, short covering has to be a factor. I’m not going to dismiss the move, but it feels very suspicious. I don’t believe this is the catalyst we are looking for to drive our market through major resistance.

All of the good news is priced into the market. Stimulus plans, bailouts, marked-to-market changes, quantitative easing and earnings are all factored in. The “fly in the ointment” is interest rates. They have continued to move higher even though the Fed is buying US Treasuries. This practice (printing money) attempts to keep rates artificially low, but it has not worked. The Fed has already used more than a third of its capital and in less than a third of its six-month timeframe.

As our government tries to raise trillions of dollars, investors will demand higher returns. If the bond auctions in coming weeks do not go well, the market will face a stiff head wind.

Corporations have also been taking advantage of renewed confidence. They have been issuing new stock to shore up their balance sheets. This dilutes existing shareholders and the new supply of stock should keep a lid on the market.

Retailers will dominate the earnings scene this week. The results have been in line and the stocks have not moved much after the number.

Economic releases are also light this week. Tomorrow, we will get the FOMC minutes and Thursday we will get initial jobless claims. I don’t believe either release will have a dramatic market impact. Trading activity will fall off heading into the weekend.

Advancers led decliners by a 2 to 1 margin and bulls have the upper hand. Anything can happen in light trading, but I believe overhead resistance will keep a lid on this market. I have a mix of put credit spread and call credit spread positions so I am market neutral. I am selling puts on commodity stocks and calls on retail and defense. All positions are working out well at this time and I will stick with what I have. There is no need to force a trade at this juncture. Keep your trades small or go golfing. 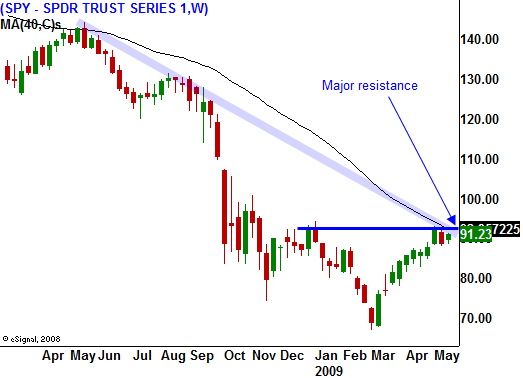