The market got the “swift kick in the pants” it needed Monday. The S&P 500 rallied 26 points on news that the Communist Party was defeated over the weekend during India’s elections. Asian markets rallied on the news and that buying spilled over.

Yesterday, the market tried to stage a rally throughout the day. In the last 20 minutes of trading, it declined and it finished unchanged for the day.

Today, the market is trying to challenge major resistance at SPY 94. Decent earnings from Target and John Deere are providing a spark. In both cases, profits dropped, but they were better than expected.

Banks continue to raise capital and GE sees signs of recovery in capital markets. Treasury Secretary Geithner has been testifying before Congress and his comments have been positive. This afternoon, the FOMC minutes will be released and that could have a positive impact on the market.

Trading volume should drop off the rest of the week as the holiday approaches. Economic and earnings news is very light. Tomorrow’s initial jobless claims number will determine the market action for the day.

This entire rally has come on light volume and I am very suspicious of it. This run-up is due to a lack of selling, not pent-up demand. Bears are cautiously waiting for the right moment and they want to measure bullish conviction as the market approaches major resistance. If they feel the momentum slow, they will step in.

Interest rates are on the rise and the dollar is tanking. These two influences will weigh on the market now that all of the good news is “baked in”.

Advancers outnumber decliners by 6 to 1 and I doubt we will see a major reversal today. However, if it happens, it will legitimize this resistance level. Yesterday’s late day selloff shows that this rally is vulnerable.

I am short call spreads on retail and defense stocks. Those positions are working out well and even though the market has rallied, these stocks have not participated to any degree. If the SPY closes above 94, I will close these spreads. I am also short out of the money put spreads on commodity stocks. These positions are very profitable and I might consider taking gains. I am not adding new positions in this light trading environment. I want to see how the action unfolds next week when the activity returns to normal levels. 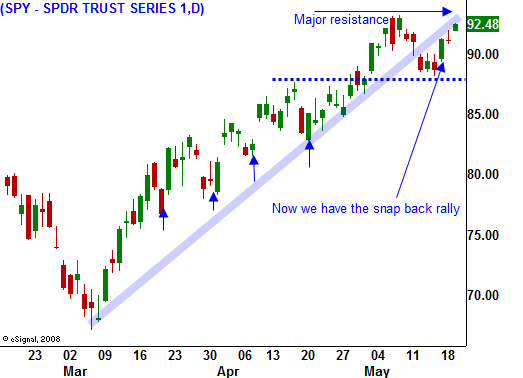