Don’t Buy Into This Rally – Line Up Shorts!

This morning, the market has been able to overcome early weakness. Over the weekend, nuclear testing in North Korea spooked investors and prices were set to open lower. Experts believe that they have a nuclear weapon equal to that used on Hiroshima.

Before the open, the Case-Schiller home index showed that prices fell 2.2% in March. The news was well received by the market since the rate of decline decelerated. However, it still represents an 18.4% year-over-year drop. Personally, I’m not buying into that bullish “spin”.

The biggest news came when consumer confidence jumped much higher than expected. Economists were looking for a rise to 42 from 40.8 in April. Consumer attitudes rose to 54.9 in May, the largest increase in six years. Since 70% of our GDP comes from consumption, Americans need to regain their confidence before we can expect economic improvement.

I would argue that while the news is encouraging, consumers are not optimistic. They have simply rebounded from extraordinary depths where bankruptcy and financial collapse loomed. Banks are stabilizing and the market has recovered some of its losses. This has provided a psychological boost, but people are not optimistic.

For decades, Americans have spent money as if they would never hit a bump in the road. Big houses, new cars, expensive vacations and big credit card balances were all “in-line” as long as the income stream continued. Now, reality has set in and people are starting to realize that they had better plan for a rainy day.

Interest rates will be the next market concern. Nations around the world are raising money to pay for bailouts and stimulus plans. The supply of bonds causes interest rates to rise. As the unemployment rate rises, tax revenues decrease and transfer payments (unemployment benefits, welfare) increase. This creates large deficits and it increases risk. Accordingly, investors demand a higher rate of return.

Last week England’s credit rating was reduced from its AAA status. Their deficit could reach 100% of GDP this year. This means that their cost of capital will increase dramatically as investors demand a higher rate of return. This news should serve as a warning sign to other countries. The United States is not nearly as leveraged, but our country is in the worst financial shape ever.

Economic releases are likely to drive the market action this week. Durable goods came in better than expected last month and that number could help the market on Thursday if initial jobless claims are in-line. However, on Friday, the GDP will be released. Last month, it came in much worse than expected.

The momentum from our recent rally has stalled and the market is struggling to hang on to gains. In the chart, you can see the bullish impact Monday mornings have had. Once that surge plays out, the rest of the week tends to decline. If the SPY breaks horizontal support at SPY 88, it will test 84. We do have end of month/beginning of the month buying to lend support this week, but I’m not looking for a big rally.

The market has run out of drivers and from a seasonal standpoint “sell in May and go away” should prevail. As the treasury issues bonds and interest rates creep higher, the market will be vulnerable to a pullback. I believe we will see a drop in the next two weeks and I am selling out of the money call spreads on retail, defense and utility stocks.

Advancers outnumber decliners by 4 to 1 and the market should stay on the plus side today. I am not looking for a big rally, but in light volume, anything can happen. As the market tries to move higher, the resistance will grow. If bears feel that the buying has dried up, they will try to publish prices lower. Don’t buy puts unless the SPY closes below 88 in the coming days. 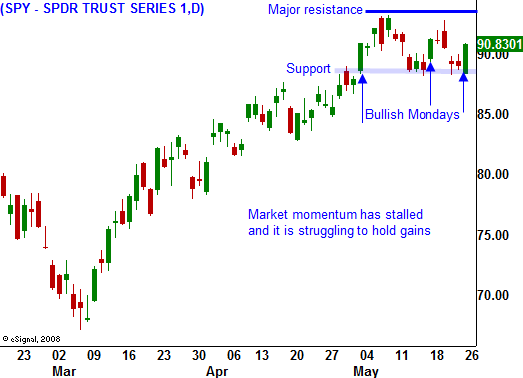