The Market Is Back Above Resistance – Expect Quiet Trading In the SPY 93 – 96 Range Next Week!

Last week, the market broke below major support at SPY 93. It had been in a tight trading range and it looked like we might finally have a long overdue decline. Nervousness set in before a record $104 billion bond auction and the FOMC. The Fed stated that they would abandon their quantitative easing in September and that created selling pressure. If the Fed is not buying Treasuries yields could rise faster than they have and that would be bearish.

As the week progressed, end of quarter window dressing and index rebalancing created buying pressure. Bond yields did not rise and last week’s auctions went well. The S&P 500 rallied 30 points from Thursday through Monday and we are just below resistance at SPY 93. We now know the breakdown was nothing more than a head fake.

This morning, the ADP employment index showed a loss of 473,000 jobs when economists had expected a loss of 393,000 jobs. Bulls continue to argue that these statistics greatly lag current conditions, yet they continue to disappoint. The market has been able to rally after this report and traders are either discounting it or they don’t believe it is accurate. Economists expect the Unemployment Report due out tomorrow to show a loss of 363,000 jobs in June. The unemployment rate is expected to rise to 9.6%. Given today’s market reaction, I doubt we will see a major selloff even if we lose more than 400,000 jobs. Continuing claims have continued to rise during the last four weeks and I believe we will see a weak number.

ISM manufacturing improved from 42.8 last month to 44.8 this month. This shows improvement, but a number below 50 still represents contraction. Pending home sales rose .1% and that marks the fourth consecutive month of improvement.

The market has been very resilient and we are getting back into the mode where interest rates and earnings are the driving forces. In the last eight months, the primary focus has been on a financial collapse and devastation in the banking sector. Bulls will have to dodge interest-rate bullets every other week since the Treasury has to auction a record number of bonds to finance this year’s $2 trillion deficit. As the new supply of bonds hits the market, investors will demand a higher rate of return.

Next week, earnings season will begin. It won’t really crank up for two weeks. Analysts are expecting a 39% drop in Q2 earnings. We have not seen many upward revisions even though 70% of companies beat Q1 earnings expectations. Last quarter analysts expected a 34% decline in earnings. We are likely to see many “beats” this quarter, but stocks have rallied 40% off of their lows and decent results are priced in. The guidance for Q3 will be particularly important. If companies choose not to give guidance, the market will flounder around the rest of the summer since it won’t have anything to sink its teeth into.

Interest rates will eventually creep higher, but until they do the market will hold up. Without either of these two “drivers” the market could fall into a relatively tight trading range the rest of the summer. After an extreme year of volatility, the action is starting to settle down. The VIX has been declining for the last six months and it has fallen dramatically during the last quarter.

For today, end-of-month/beginning-of-the-month fund buying is still providing a bid to the market. Advancers outnumber decliners by four to one and the market is likely to finish on the plus side. After an initial reaction to the Unemployment Report tomorrow, trading should settle down quickly as traders head for the exits and start their holiday.

Next week, economic releases are light and many traders will extend their weekend. The earnings releases are also minor and quiet trading lies ahead. Try to take advantage of time decay and sell out of the money options. 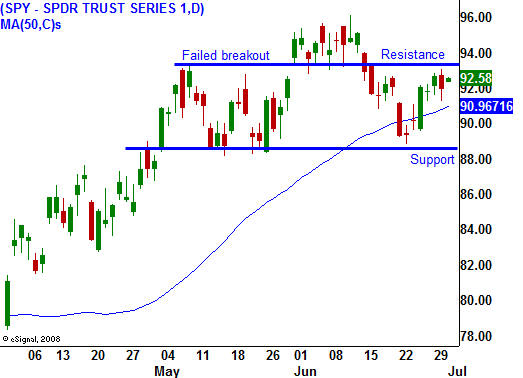