Bears Can’t Knock This Market Down – Breakout Above SPY 96 Likely – Be Careful!

In the last two weeks, we have gone from a bearish head and shoulders breakdown to a new relative high. The market has rallied almost 10% in that time and the momentum is very strong.

Rising interest rates put the brakes on June’s rally and investors were concerned that the continuous supply of new bonds would put upward pressure on yields. The Treasury has to finance a $2 trillion deficit and huge bond auctions will be held every other week. In its statement, the FOMC said that they will not be buying Treasuries after the September deadline. This was a sign that the Fed is less accommodative and stocks drifted lower. To the surprise of many, the bond auctions over the last few weeks have gone much better than expected and interest rates started to decline. This paved the way for a big rebound.

Technicians could easily see the head and shoulders formation and the neck line at SPY 89. That level also represented the 200-day moving average. When it was breached, bears piled in. The large short interest also provided a catalyst for the rally when shorts had to cover.

Goldman Sachs blew earnings estimates away and financial stocks surged higher last week. That rally got the ball rolling. The next day, Intel beat estimates by a huge margin and they provided strong guidance. This rally sparked a huge round of short covering and Asset Managers that were under allocated scrambled to place money. Since that initial run, the XLF (financial sector ETF) and the SOX (semiconductor index) have been relatively flat indicating that good news is priced into these sectors.

This has been a very busy week and a flood of earnings have hit the market. One general observation is that cyclical stocks are rallying even though the top line growth and the guidance have been weak. Companies have done a great job controlling costs and the bottom line is beating estimates. However, the rally in economically sensitive stocks is all based on the promise of a recovery. I’m also seeing short covering in many of the laggards and they are rebounding after posting weak results. My conclusion is that the market is getting ahead of itself.

The market has been able to hang on to its recent gains and that is a positive sign. Tuesday and Wednesday profit takers were did not spark a round of selling and both days the market recovered quickly. The bid is strong and I expect to see us break out to a new relative high by the end of the week. That should spark another round of short covering. Once that impetus runs its course, the market should fall back below SPY 96.

Call me skeptical, but the recent breakdown below SPY 89 did not hold and I don’t believe this breakout above SPY 96 will hold either. The market is searching for direction and these light volume moves will fool as many traders as possible. Good results are already priced into the market and valuations are getting stretched.

Analysts keep talking about a rebound, but I am not seeing that reflected in energy or transportation. If global economies were truly rebounding, we would see oil prices move higher. Production and exploration has been cut and any uptick in demand would deplete inventories. Crude supplies are still running high. Railroads and truckers are posting weak numbers and they are providing dismal guidance. This morning, UPS missed its number by a large margin and it is often considered an economic barometer. Until I see these conditions change, I am not buying into the recovery theory.

The earnings releases will continue to be heavy next week. We will also get new home sales, consumer confidence, durable goods, the beige book, GDP and Chicago PMI. While this news should generally be positive, a stiff head wind will return. Next week, approximately $110 billion in longer-term Treasuries will be auctioned. I believe interest rates will start moving higher.

In summary, the market is likely to break out and fall back into its trading range the rest of the summer. The greatest risk is to the upside and we have seen massive one-day rallies. Consequently, I will maintain a “buy the dip” approach and I will be selling out of the money put credit spreads to distance myself from the action. Look for stocks that have released solid earnings and have rallied after the announcement. 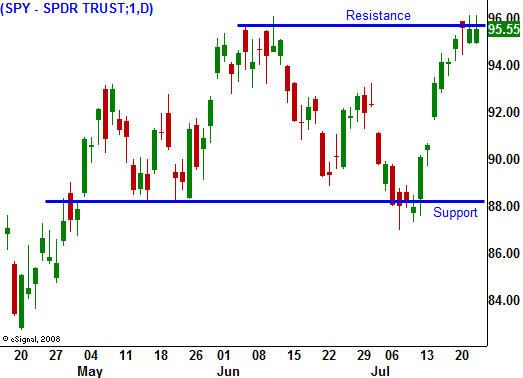