The Market Is Likely To Test The SPY 96 Breakout In The Next Week!

From one week to the next, the market has been very volatile. I’m trying not to read too much into the price action during this time of transition.

A month ago, bears had their chance and the market broke below major support. Interest rates were rising and a glut of new bonds would almost certainly keep the pressure on. Bad loans and mortgage foreclosures continued to weigh on banks as the unemployment scene continued to deteriorate. These concerns are still alive and well.

Three weeks ago, bulls took their shot. Earnings from Goldman Sachs, Intel and IBM got the ball rolling. Analysts have low-balled estimates and companies are beating by a large margin. Economic data is starting to improve and forecasts are being revised upwards. In the last two weeks, shorts have been carried out in body bags as the market staged an 11% rally.

The surprise element from this earnings season is waning since we have heard from almost every group. I expect the numbers to consistently beat estimates, but good news is already priced in to stocks. I also expect economic data to be “less bad”. Conditions have deteriorated to multi-decade lows and a base is forming.

As I see it, there is a growing divergence. Corporations have great balance sheets and they have been fiscally responsible. When conditions deteriorated, they quickly scaled back operations and maintained their bottom line. The same cannot be said for the rest of our country. The US is laden with debt that spans from the government, to states, to municipalities, to individuals. In 10 years 100% of our country’s tax revenue will be spent on interest on the national debt and entitlement programs (Social Security, Medicare). This freight train is no longer generations away; it is right on our doorstep! States are running in the red and they can’t control costs. The average baby boomer has less than $60,000 saved for retirement. Corporations are cutting corners and they are not contributing to a 401(k) plans.

The market has rallied and stocks look attractive on a valuation basis. However, when you look at the rest of the picture you wonder where the future growth will come from when no one has any money to spend. The government, states and municipalities will continue to increase taxes to pay for budget shortfalls. Politicians are incapable of controlling costs and in their minds the only solution is to raise taxes. This will further crimp consumption.

All eyes have been on China and the expectations for a massive recovery are high. I don’t believe one nation can pull the rest of the world out of a deep recession. Over 40% of their GDP relies on exports. Who will buy their goods?

As for the here and now, I will respect the market rally that has taken us to a new relative high. Money is flowing into equities and any pullback will represent a buying opportunity. Economic data should continue to improve since we are climbing out of a deep trench.

Tomorrow, durable goods orders and the Beige Book will be released. Durable goods orders have beat estimates three straight months and the number should have a positive influence. Thursday, Q2 GDP will be released and analysts are looking for a decline of 1.5%. This could come in weaker since Q1 GDP missed by a large margin. Bulls have been able to discount weak economic news saying that it is “backwards looking” and they should be able to get past this release.

This week, a record number of bonds ($200 billion) will be auctioned. They are all relatively short-term maturities and the demand should be good. Asset Managers want to stay on the short end of the yield curve. However, there is a much greater risk long end of the yield curve and those bonds will be auctioned in two weeks. The government has been financing our debt with shorter term maturities and that is like buying a house with an ARM. If interest rates rise in the future, our cost for this financial crisis will skyrocket.

We are getting a small pullback today and I expect the market to test the breakout at SPY 96 in the next week. Sell out of the money puts on strong stocks and keep your size small in this volatile market. 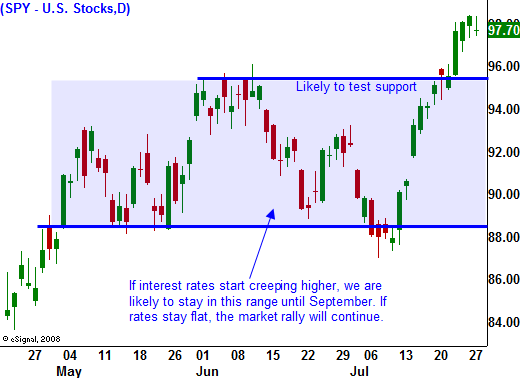