Bernanke’s Reappointment A Positive – Durable Goods Should Be Bullish Tomorrow!

Yesterday, the market continued to push higher after making a new relative high last week. The upward momentum is strong and bulls have control during light volume market conditions. By the close, some of yesterday’s gains had evaporated and the market feels a bit heavy.

Overnight futures were trading lower and we were poised for a slight decline on the open. Asia was relatively weak and the Chinese market was down 2.5%. Not many news events were scheduled and this was shaping up to be a quiet day.

President Obama provided a spark when he reappointed the Fed Chairman. The market reacted positively and most analysts applauded the move. Ben Bernanke has guided us through perilous times and a change at the helm would have wreaked havoc. This announcement also helped to soften news from the White House Budget Office. They now feel the economy is in much worse shape than originally predicted and the budget deficit could grow by $9 trillion over the next 10 years. That is $2 trillion more than expected. They also feel that the unemployment rate could reach 10% this year and they don’t expect improvement until next year.

Thursday, the next iteration of Q2 GDP will be released. It jumped from -5.4% to a -1% from Q1 to Q2. This number should not weigh on the market. Tomorrow, durable goods orders will be released. Improvement in housing and the cash for clunkers program could produce a big number. This news should generate a positive reaction.

Trading is very light and the volume has fallen off. Congress is not in session and that reduces the chance for surprises. Bulls have the momentum and bears will not stand in the way of this rally.

I am selling out of the money puts on strong stocks so that I can distance myself from the action. September is traditionally a weak period. Ideally, I would like to buy a dip. Unfortunately, many people are waiting to do the same and it might not materialize. That is why I am establishing 25% of my position now. If the pullback happens, I will add. If it does not, I will stick with what I have. The market is overextended and I don’t want to chase prices at this level.

For today, look for light action with a positive bias. As long as SPY 101 holds, you can add to short put positions. 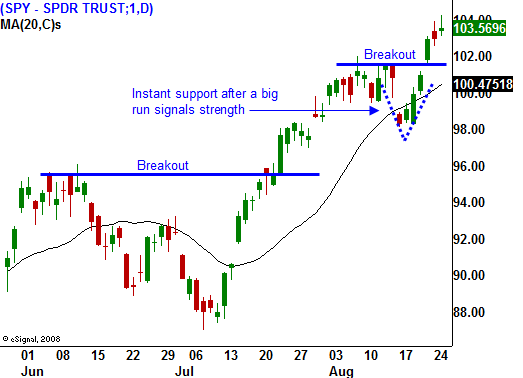