This week, the market has been looking for a new catalyst to push it higher. After last week’s big run, the market looks tired and it might be a little ahead of itself.

Yesterday, news that Ben Bernanke would be reappointed should have resulted in a big rally and it did not. He has guided us through one of the toughest periods since the Great Depression and a change at the helm would have wreaked havoc on the market. The announcement did not have to be made for many months, but analysts were wondering why they would delay when the decision was obvious. His reappointment removes uncertainty from the market and he can start working on his plan to unwind Fed easing.

The White House Budget Office revised its economic forecast and conditions are worse than expected. In the next 10 years, our budget deficit will grow by $9 trillion, $2 trillion more than expected. This does not include any provisions for health care reform. They expect unemployment to hit 10% this year and they don’t see improvement until 2010. This news negated the positive influence from Bernanke’s reappointment.

This morning we learned that durable goods orders rose by 4.9% in July. That was much better than expected and transportation orders were up 18.4%. That was largely due to commercial aircraft orders. Auto sales increased by .9% and it looks like cash for clunkers will hit next month’s number. We know the program has been very successful.

New home sales were also released this morning and they rose for a fourth straight month in July. Sales rose 9.6% and the market had a very positive reaction to the number. This was the biggest monthly percentage gain since February 2005. Interest rates are low, home prices have fallen dramatically and the $8000 tax credit is available through November. Home sales have fallen so dramatically that an increase from that deep trough should be expected under these conditions.

Tomorrow, we will get the next revision for Q2 GDP. The increase from Q1 to Q2 was dramatic when the first calculation was released last month. If that number stands, the market should have a positive reaction. The possible “fly in the ointment” is initial jobless claims. Last week it increased more than expected and if we see that again this week, it won’t be well received.

The news is rather light and so is the trading activity. Bears will not stick their neck out and bulls are searching for their next catalyst. The path of least resistance is higher but the market feels a little heavy.

I am sticking to my strategy and I am selling out of the money puts on strong stocks. I have 25% of my desired risk exposure on right now and I don’t plan on adding unless I see a pullback to support. In today’s chart I have outlined the support levels I am keeping an eye on. As long as SPY 96 holds, I will maintain my bullish bias.

Almost everyone I listen to on CNBC is looking for a pullback in September. That is seasonally a weak period and they plan to buy that dip. When I hear this theme over and over again, I question whether it will materialize. The best rallies have come after market declines and I hope this scenario unfolds. In case it does not, I want to at least have a small position on.

Trading has settled into a tight range today and I’m not looking for a big move either way. Advancers and decliners are balanced and a quiet day is in the making. Sell some out of the money puts, but keep your risk exposure small. 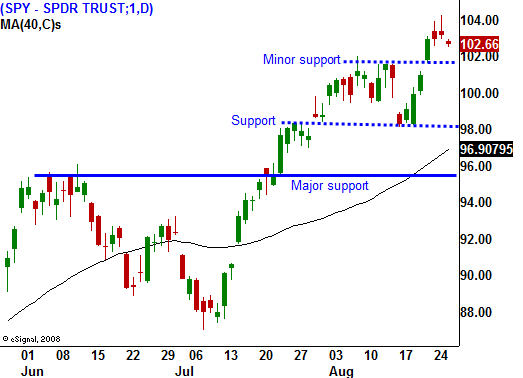