Yesterday, the market started off on a positive note. A better than expected ISM manufacturing number and solid pending home sales sparked buying. Soon after the open, a nasty reversal set in and the S&P 500 closed near its low of the day. In the process, it broke below SPY 101, signifying a failed breakout.

This morning, the ADP employment index came in worse than expected. Analysts projected 250,000 job losses in the private sector last month and employers actually cut 298,000 jobs in August. After the number was released, the market had a muted response. Factory orders rose 1.3% in July and that was less than the 2.2% economists had projected. Strength in aircraft orders offset a 1.9% drop in non-durable goods and a .9% decline in durable goods. All told, the market has not moved much off of these economic releases.

This afternoon, the Fed will release its minutes. They are committed to keeping interest rates low and I do not expect to hear anything about an exit strategy. That would mean that the Fed is preparing to tighten. Inflation is not a concern and the economy has been slow to recover. Ben Bernanke has been reappointed and he will fight to keep interest rates low. This release should be positive for the market heading into the close.

Tomorrow, initial jobless claims will be released. Initial jobless claims have not improved in recent weeks and that could weigh on the market ahead of Friday’s Unemployment Report. Traders are nervous after a nice market rally and they want to see signs of hiring. If the unemployment rate jumps back to 9.5%, fears of a double dip recession will resurface. Analysts are expecting a loss of 225,000 jobs in August.

Tomorrow morning, ISM services will also be released. This is an important number since 80% of our jobs are service related. It has been steadily improving over the last four months and analysts expect it to come in at 48. That is just below 50 which would indicate economic expansion. If both numbers meet expectations, we could see a nice rally.

Traders are nervous and the volume has dried up heading into the holiday. I am keeping my powder dry and I want to see how strong support is at SPY 98. If buyers come in at that level, I will sell some out of the money put credit spreads. If that level is tested and it fails, I will stick with my current positions. The biggest support level is at SPY 96 and I expect it to hold. As long as it does, I will continue to look for put selling opportunities.

After a big one day decline, the market is taking a breather. Decliners outnumber advancers by 3 to 2 and we are in for a quiet day. The FOMC minutes this afternoon should provide a late day rally. Nervousness ahead of the numbers will keep a lid on any rally. Be cautious and line up your bullish stocks. Better trading is just around the corner. 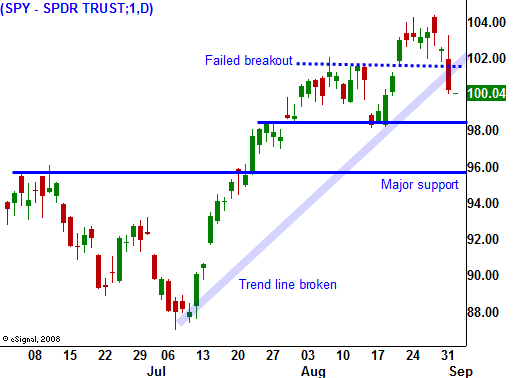