Dead Till The Unemployment Report – Bad News Could Already Be Priced In!

The market feels like it’s running out of steam and we saw signs of that last week. Ben Bernanke was reappointed as the Fed Chairman and that should have provided a big boost to the market. Durable goods orders rose 2.4% (much better than expected) and Q2 GDP came in at -1% (better than expected). Dell posted better-than-expected earnings and Intel substantially raised guidance. With all of the positive news, the market was barely able to tread water.

Tuesday, ISM manufacturing increased more than expected to 52.9. That indicates economic expansion. Construction spending came in below estimates, but residential building was better-than-expected. Pending home sales rose 3.2% and that was also ahead of estimates. After an initial rally, the market quickly reversed. The market slipped into a nasty decline and by the close the S&P 500 futures were down 25 points. In the process, we fell below the breakout at SPY 101.

Unemployment is the focal point this week and nervousness ahead of tomorrow’s number sparked profit-taking on Tuesday. Initial jobless claims have been struggling the last four weeks and there is a chance that tomorrow’s number will disappoint. Today, jobless claims came in at 570,000 (560,000 were expected). The four-week average is a good indicator for the unemployment trend and 4000 jobs were shed from that calculation this week. Continuing claims rose 90,000 and it stands at 6.23 million. Yesterday, the ADP employment index showed that 298,000 jobs were lost in August. While that is a big improvement from the 360,000 jobs that were lost in July, analysts were looking for a much better number. I suspect that the unemployment rate will rise tomorrow and the number will be worse than expected. However, after Tuesday’s decline, much of the bad news might already be factored in.

ISM services came in at 48.4 today and that was better than expected. A number above 50 indicates economic expansion and we are close to seeing that. Almost 80% of our workforce is tied to services and this is a very important number. The market has had a decent reaction and stock prices are stable.

Overnight, the ECB said that it is seeing signs of an economic recovery. Their overall activity only dropped .1% in Q2. Next year, they project a .2% growth rate.

Light holiday trading has set in and we can expect that to continue into next week. Initial claims and consumer sentiment are the primary economic releases next week and they are not major market movers. The Treasury will hold 3-year, 10-year and 30-year bond auctions next week. Interest rates have been declining and the demand should be good. All in all, we are setting up for quiet trading.

September is the weakest month of the year and we saw some profit-taking this week. The news has generally been good and there is no other explanation for the decline. The path of least resistance is up and I suspect that we will see a pullback and a very sharp snap back rally. As long as SPY 96 holds, I will maintain my bullish bias.

For the time being, I am short puts on strong stocks and I am largely in cash. I want to add to positions on pullbacks but I will wait for signs of support. Low interest rates, solid earnings and “less bad” economic releases will keep a bid to this market. Stay bullish and be cautious. Great trading is just around the corner. 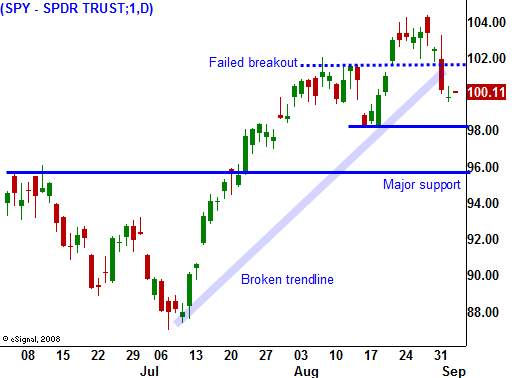