Quadruple Witching and Momentum Are Likely To Push Us Higher This Week!

Yesterday, the market recovered from early weakness and it established a new relative high. Early in the day traders were concerned that a trade war could break out between the US and China. There is likely to be some jousting between the two countries, but protectionism would ultimately hurt both.

This morning, Ben Bernanke said he thinks the recession likely has ended. However, the recovery will be modest at best. This news did not come as much of a surprise and the market did not have much of a reaction.

Retail sales climbed 2.7%, the biggest gain since January 2006. However, cash for clunkers attributed for much of the gain and that temporary catalyst has passed. Excluding autos, sales jumped 1.1% in August.

The Empire Manufacturing Index rose to 18.9 in September and that was the highest level since November 2007. Analysts expected a reading of 14.

The PPI rose 1.7%, more than twice what analysts had expected. Gasoline prices posted their biggest surge in more than 10 years and that accounted for most of the inflation.

All of the news today has produced a giant yawn. The S&P 500 is unchanged and advancing issues slightly outnumber declining issues. The “less bad” theme is intact and that is a positive for the market.

New home starts could be one piece of economic information this week that could drive the market. Traders would rejoice if they see improvement in this area. This number will be released Thursday and I’m not looking for a monumental change. However, any improvement from the depths of this housing cycle could spark optimism heading into quadruple witching.

The market is making new relative highs and option expiration could have a positive influence. As the market grinds higher, traders will have to reel in short call positions or they will have to buy stock to adjust risk. In either case, the action is bullish.

The path of least resistance is higher. Commodity stocks have a strong bid and I have been selling out of the money puts in this sector. Look for a grind higher today in quiet trading. 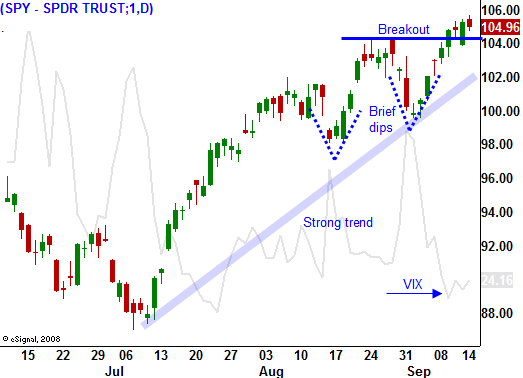