Key Reversal Set Us Up For Weakness Today. Wait For Support and Get Long!

Yesterday, the market rallied after the FOMC maintained their current policy. They will continue to support low interest rates and they did not outline an exit strategy. This is good news for businesses and consumers. Unfortunately, bulls ran out of gas and by the close, the market staged a key reversal. Technicians watch this price action very closely and that set us up for weakness today.

Before the open, initial jobless claims fell 21,000 to a seasonally adjusted 530,000. That was better than analysts had expected and the four-week moving average dropped to 553,000, the lowest since January 24th. This shows gradual improvement in the unemployment scene and it sparked a small rally. Shortly after the open, the market erased those gains and it is testing the downside with ease.

The selling pressure had already shown itself before existing home sales were released at 10:00 am ET. They dropped 2.7% last month and analysts were expecting a much better number given that sales had increased the prior 3 months. The market decline gained momentum after the release and it looks like we are set up for a round of profit-taking.

Apart from profit taking, there really isn’t much of a reason for the decline. I would not read too much into it. The market has rallied dramatically in the last two months and it needs to take a breather. Last week, the quadruple witching rally felt fabricated (expiration buy programs) and I’m not surprised to see those gains taken back.

I believe that we will see nervousness throughout the week, but the market will find support at SPY 100. The “less bad” theme will remain intact and this dip will set up a buying opportunity. After next week, Q3 earnings season will be upon us. This recession is more than a year old and the comps should be easy to beat. That means we will actually see earnings growth and by comparison, revenues will start to improve. Interest rates are low, economic conditions are improving and earnings will exceed expectations. These factors will drive a year-end rally.

The market won’t rally in a straight line. The easy money has been made and we can expect dips like this along the way. The pullbacks we saw in August and September were sharp and brief. Each led to a higher low and a new relative high. As long as SPY 100 holds, this same pattern is likely to repeat itself.

Asset Managers are fearful that they will miss a year-end rally and they are eager to put money to work. This low volume decline is nothing more than profit-taking and we are likely to see them bid for stocks before support is tested. In this market, you have to buy the dips and sell the rips.

If the market closes below SPY 105 today, I would take profits on long positions and I would go to cash. Wait for support to establish itself next week and buy stocks with relative strength. An alternative strategy is to sell out of the money put spreads. I have been using this strategy the last three months and it is my preferred approach since I can distance myself from the action. This rally is in the 7th inning and there is still more upside to come. 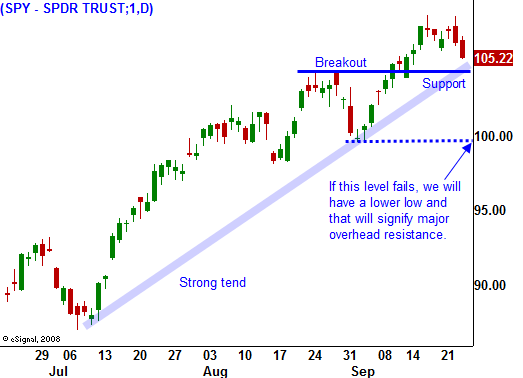