My cautious comments over the last week were justified. The market has pulled back sharply this morning. Granted, I thought we had the possibility for an expiration short squeeze after the market nudged its way to a new 2009 high. However, I have been urging you to keep your size small and to focus on put selling opportunities. I also noted that I would only be trading from the long side on an intraday basis.

The recent rally has taken place on light volume, telling me that a lack of selling (not intense buying) caused the run-up. I have also been referencing the marginal breakout to new highs in October and the steep decline shortly thereafter. These warning signs tell me that the backside of this rally can be very slippery and you don’t want to overstay your welcome.

This morning, initial jobless claims came in just as expected and 305,000 jobs were lost (analysts expected a loss of 303,000). Continuing claims dropped by another 4000 and that was also in line. LEI was right on the number and Philly Fed came in better than expected. These releases were within expectations and they did not spark the selloff.

Housing statistics continue to deteriorate. Delinquency rates rose by .4 basis points and they stand at 9.64%. Foreclosures are at 4.5%. Almost 15% of all homes in the US are delinquent or in foreclosure. The Fed has been buying home loans like mad in an effort to keep mortgage rates low. Home prices are falling and the two conditions should eventually take root. This number did not catch anyone by surprise and it is not the culprit behind today’s selloff.

Global markets were weak with Europe and Asia losing about 1.5% overnight. The 20 point S&P 500 drop seems overdone, but it shows that large swings can take place in light volume conditions. It also shows that Asset Managers are not as aggressive as they were a few months ago. They can feel the momentum coming out of the market and they are not worried about missing a melt up. It’s becoming more apparent that we might have another 5% of upside left in this rally.

A week ago, I mentioned that the market needed to quickly break out to new highs and forge its way higher if it was going to sustain the recent rally. We did breakout to new highs (barely) and the market stalled. The absence of news should have been positive since traders would tend to focus on decent earnings, low interest rates, improving economic numbers, mergers and acquisitions and seasonal strength. The open interest for in the money index calls also favored option expiration buy programs.

I still feel that option expiration influence exists if buyers establish a support level this morning. If traders sense that a firm bid is in place and that we will grind higher the rest of the day, they will leg out of hedged positions and this will “goose” the market.

Light trading will set in ahead of Thanksgiving. This has traditionally been a bullish period for the market. The economic news is loaded up on Tuesday and Wednesday with GDP, consumer confidence, durable goods orders and initial jobless claims. GDP came out much better than expected last month and if the number is not revised lower, it should be positive for the market. Durable goods orders are volatile month-to-month and I won’t even venture to guess how it might come out. Because it does whip saw, the reaction tends to be temporary. Consumer confidence will be important heading into the holiday and analysts are looking for 47.5. It was 47.7 last month and a small decline is expected. Initial jobless claims could drop below 500,000 just because people postpone filing for unemployment during holidays.

Technically, the market looks tired. The breakout in October was marginal and the ensuing decline was deeper than the previous declines in August and September. The breakout this week was negligible and we are instantly seeing a considerable decline. While this price action suggests that resistance is forming, it does not signal that a major plunge lies ahead. The uptrend is still intact and pullbacks represent an opportunity. I feel the SPY will find support at 106.

I will be selling out of the money put spreads this week and I will build to 25% of my desired position. I want to take advantage of time decay during the holiday next week. I will continue to add put credit spreads as support establishes itself. My November put spreads are safely out of harm’s way and I am not sweating today’s decline in the least. This strategy has been very successful in the last six months. The key is finding the right stocks. Focus on the stocks that are featured in the Daily Report and continually rise to the top of the Live Update table. Stay on the sidelines and wait for support – then sell out of the money put spreads on strong stocks.

If the breakout at the October closing high of SPY 110 fails today, there will be a shorting opportunity this afternoon. If SPY 110 holds, we could see a nice rally off of the low. This is a great trading market and as Daily Report subscribers, you know right where to look! Go to the Live Update table and focus on stocks that are at the top of the list. 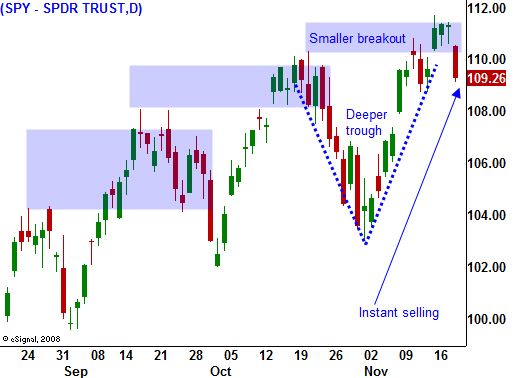