Seasonal Strength Alone Will Not Push the Market Through Major Resistance!

The market is once again trying to break through heavy resistance. The NASDAQ has already broken out to new highs and is strong today. Keep in mind that the QQQQ is still 60% below its all-time high and the SPY is only 30% off of its high. It is starting to make up ground.

Seasonality is driving the market higher and even a small bid can lift the market in light volume. Bears are not going to stand in the way.

This morning, the final revision to Q3 GDP was posted. It dropped down to 2.2% when analysts were looking for 2.8%. Since the initial estimate of 3.5%, the number has continually declined. Consumer spending drives 70% of our economic activity and it declined .1% from previous estimates. Business investment dropped dramatically and corporations are playing it safe while they wait for an uptick in demand. Commercial construction was down more than 18%. This was a dismal number, but analysts followed up with a rosy projection for Q4. Based on retail sales, business inventories and trade balance, they believe that Q4 GDP will grow from 4% to 4.5%.

I am not as optimistic. The government, states and consumers are tapped out. Reckless spending over many decades will haunt us for years. Uncle Sam threw the kitchen sink at the financial crisis and our country is painted into a corner. New stimulus will be fought tooth and nail and many Democrats are worried about our debt level. If a stimulus program did get past, our debt rating could be vulnerable to a downgrade.

In 10 years, our country won’t be able to pay for interest on the national debt and Social Security/Medicare. States are $300 billion in debt and they will not stimulate economic growth. By law they have to balance budgets and they will curb growth when they cut expenses (payrolls) and raise taxes. The last great consumer driven recovery happened six years ago. After 9/11, the Fed lowered interest rates dramatically and everyone refinanced their mortgages and took out cheap home equity loans. Overnight, consumers had “new found money” and they spent it. Consumers have fired their last bullet. Retirement savings are horrible and baby boomers have started collecting Social Security. One out of every three homes has negative equity and many thought this would be fund their “golden years”. We can see the cracks in the dam and 15% of all mortgages are delinquent or in foreclosure. Where is all of this demand going to come from?

China has accumulated wealth, but they will do what’s best for China. It is foolish to expect a communist country to pull us out of a recession. They will exhaust every domestic resource before they feed their table scraps to the rest of the world.

India and Brazil hold promise, but their economies were just starting to generate wealth. They are dependent on our consumption.

Europe, Japan and the US all have major debt levels. Loose credit and the multiplier effect have become a giant Ponzi scheme. Like Bernie Madoff, we attract new money so that we can make good on our obligations (interest, Social security) and we spend what’s left over. In decades past, Americans bought the majority of US Treasuries. Now, almost half of our debt is financed by foreigners.

This game will continue as long as all of the players stay in the game. When the weakest country can’t service its interest payments, the house of cards crumbles. It will start with minor players (Bulgaria, Latvia, Greece, Spain, Portugal and Ireland) and it will spread.

From a trading standpoint, the biggest problem is timing. At most, it continues for 5 years.

For now, let’s focus on the near term. Resistance is in place and I feel profit taking will keep a lid on the market. I am selling out of the money call spreads. As we get closer to year end, I feel the selling will accelerate. I am going against the grain (75% of the time we do see a year-end rally) and I am not taking big positions.

Today’s rally has stalled and trading is very quiet. With major resistance overhead, I do not expect much more upside before the close. 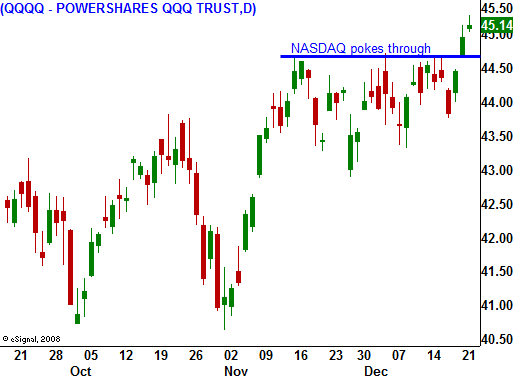