The Biggest Bailout News Is Swept Under The Carpet. FRE, FNM, GMAC and AIG Could Hit $1 Trillion.

In quiet trading, the market is making a new high for 2009. Seasonal strength is offsetting any weak news.

GDP and durable goods orders both came in lighter than expected last week. This morning, a botched terrorist attack on a Northwest flight from Amsterdam to Detroit did not rekindle fear. Airport security and a multitude of other security measures failed to prevent the incident and if not for a failed detonator, 300 people would’ve lost their lives.

MasterCard showed that retail sales increased 3.4% from November 1 through Christmas. That piece of news along with better than expected Japanese factory output have the market trading in positive territory.

Over the weekend, the U.S. Treasury Department removed its preset limit of $200 billion in credit for Fannie Mae and Freddie Mac. As you know from my comments recently, these two government-sponsored enterprises could require as much as $400 billion each. If you add in GMAC and AIG, the tab could grow to $1 trillion just for these companies.

Politicians have been quick to rejoice about the repayment of TARP from major banks, but this news gets swept under the carpet. In total, they only received $285 billion. Some of the major banks did not even need the money so repayment was fairly easy. Those banks that are truly stressed will find it difficult to raise capital and repay the government. We saw that last week when Citigroup’s secondary offering failed miserably.

The risk from horrible lending practices is not gone; it has simply shifted from financial institutions over to the government. Supposedly, our nation’s bottomless balance sheet can shoulder the blow. While that shortsighted line of thought might work for the next year or two, this party is almost over. In 10 years (or less) our entire national budget will be spent on interest and entitlement (Social Security, pensions, and Medicare). What is the solution? The government can default on US Treasuries, it can stop paying Social Security and send millions of retires into poverty, it can balance the budget through massive cutbacks or it can impose monster tax increases. All of the solutions have a common theme – pain.

When the next crisis hits, it will make the last year look like a cakewalk.

The economic news this week includes consumer confidence, Chicago PMI and initial claims. I don’t believe any of these numbers will have a lasting impact on the market.

I still believe we will see selling into year end. I’m not looking for a major decline, but we should pull back into the range that we’ve seen the last two months. I need to see a major breakdown below SPY 108 before I can aggressively take short positions. Option implied volatility is low and it is a premium buyer’s market. I have been selling out of the money call credit spreads, but I am not adding to positions. The risk/reward is simply not there.

Keep your powder dry and try to buy puts on a breakdown below SPY 112. That was resistance and now it is support. If that level fails, we could see a swift decline that flushes out bullish speculators.

Trading this week will be light and you should keep your positions small. The S&P 500 has had a one point range in the last two hours and I am not expecting it to move much today. 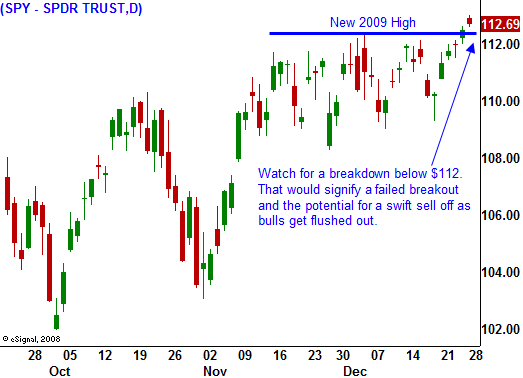