After seven consecutive rallies, the market is taking a breather. It could not move to new highs yesterday and even with a positive initial jobless claims number this morning, it can’t break out.

As I mentioned yesterday, the NASDAQ has posted a loss on the last trading day of the year for nine consecutive years. Given today’s action, it looks like 10 in a row. If you took my advice and shorted stocks early this morning, you are finishing the year on a positive note. Take profits before the close and avoid the long weekend.

It’s been one of the wildest years in my career and I can’t recall anything like it. I don’t believe that decades of overspending can be solved in a year. The credit crisis has not been solved; it has simply shifted from financial institutions to deeper pockets – our government. As taxpayers, we all own a piece of the mortgage crisis above and beyond our own properties.

One out of every three homes has negative equity and 15% of all mortgages are either delinquent or in foreclosure. This week, our government extended additional bailouts to Fannie Mae and Freddie Mac. Analysts believe that they will need $400 billion each to weather this storm. This dwarfs the $285 billion lent to banks in the form of TARP.

If our government continues to spend money, our nation’s credit rating will fall. Politicians on both sides of the aisle fear that we will not be able to meet our obligations in 10 short years. By the time the next decade rolls around, our country will be in dire financial straits if we don’t change our ways. In 2020, 100% of our budget will be spent on interest expense and entitlement (Social Security, Medicare, pensions). Add healthcare to that equation and the deadline moves closer.

The only solution is to dramatically reduce spending and to hike taxes. This would crash our fragile economic recovery and it would not be a popular move. Obama is likely to kick this can down the road and after his term we need to prepare for extreme pain. He did not create the problem, but instead of taking corrective action, he is making matters worse.

I believe enough politicians understand the gravity of the situation and I don’t think liberal spending programs will get passed next year. That means our economy will have to recover without stimulus from the government.

Some of the approved stimulus money will be spent next year and that will help in the first half. We are not likely to see dramatic tax increases until Q2 and that will help 2010 get off to a decent start. That means the market will range from SPY 100 – 115 during the first quarter.

I have a number of predictions for next year. First of all, China’s economic growth will stall. They will be sitting on large inventories because they overproduced when demand was low. Trade sanctions with the US will escalate and yesterday’s protectionism in the steel industry was just the beginning. Europe will continue to weaken and the entire EU will be brought into question as countries default and larger members turn their backs. Germany has already said that it does not plan to bail out Greece. As a percentage of GDP, Europe’s debt levels are much higher than ours and the risk is real. Americans that have jobs will scramble to pay down debt and get their balance sheets in order. Those without work will struggle to get by. Consumption will be low and corporations will be slow to rehire. As the year progresses, the threat of a double dip recession materializes.

It’s hard for me to find economic positives as I look ahead, but let me try. First of all, we will generate trading profits if the market does fall. Money doesn’t solve all of our problems, but it helps. After decades of reckless spending and gluttonous consumption, perhaps Americans will find pleasure in the simple things life has to offer. Family, friends and religion will become more important than expensive cars and fancy vacations.

May you and your loved ones have a healthy and prosperous start to the next decade. 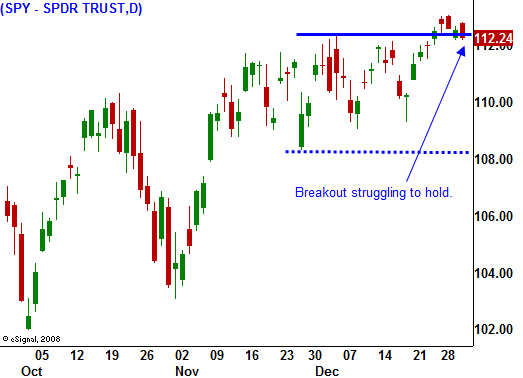