Strong Unemployment Report Not Likely To Result In A Huge Rally!

The market has been creeping higher day-by-day and yesterday it established a new relative high. We aren’t seeing an explosive breakout for a few reasons.

Bears have been carried out in body bags the last eight months and they have covered short positions. They are not going to stand in the way of this freight train until they see technical support fail. Option implied volatilities are at 18-month lows and speculative put buying is very low. Consequently, we aren’t seeing any panic buying to cover short positions.

After a 70% rally from the lows, prudent investors are reducing risk. They have seen their portfolios recover from the depths of despair and they are selling stock. Traders that have made great money are also taking profits. This supply of stock is containing the rally.

Valuations are also getting stretched. Stocks are priced for a full recovery and Asset Managers are not chasing them higher. Last quarter, more than 70% of all companies beat earnings estimates. Great results were priced in and the market did not rally on the news. Q4 earnings start next week and we will be able to gauge the market’s reaction.

Banks dominate the first two weeks of earnings and they have not participated in the recent rally. A huge spread between the borrowing and lending rate should bode well for profits. The financial sector could push the market to new highs after earnings are released. After that initial rally, the momentum should slow for the rest of earnings season. Tech stocks have been extremely strong and the NASDAQ broke out to new highs well before the S&P 500 did. Cyclical stocks have been running higher even though the guidance has been guarded.

The economic news this week has not had much of an impact on the market. Yesterday, the ADP employment index was in line and it showed gradual improvement. This morning, initial claims came in as expected and 434,000 new claims were filed. That was 4,000 better than expected. Most analysts are looking for a huge improvement in tomorrow’s Unemployment Report. Although the consensus estimate is for a decline of 35,000 jobs, many analysts have raised their projections and they are looking for a positive number. Job growth is the key to an economic recovery.

Seemingly, a rebound in employment should rally the market. If we get a spike higher on the open, sellers will step in. A big number is priced in and profit takers will unload stocks. Fears of rising inflation will also keep a lid on the rally.

This gradual drift higher could remain in place for a few weeks as earnings season unfolds. Many analysts believe that year-over-year earnings could grow by 200% for the S&P 500. That is partially due to the horrible numbers posted last year and it is due to cost containment. Corporations have slashed expenses, but revenues have been slow to recover. Top line growth will determine the market’s direction in coming weeks.

This morning, retailers posted better than expected results for December. Out of 25 companies (that had reported at the time of this commentary), 17 had beaten estimates. Consumption accounts for 70% of our GDP and consumer spending is a healthy sign.

Conveniently, the market has been able to discount negative news. Earlier in the week, the ECB said it will not bailout Greece. Portugal, Italy, Ireland, Greece and Spain (PIIGS) are all on the ropes. One failure could cause a domino effect. This morning, China raised interest rates to curb growth. The entire world is depending on China to pull us out of this recession and now they are trying to put the brakes on.

Bullish sentiment is at an extremely high level. That condition can persist for an extended period of time, but it ends with a dramatic decline. Yesterday, more than 8 million equity call options traded for the second consecutive day. We haven’t seen this type of activity in months. Almost every analyst on CNBC is bullish and 80% of newsletter writers are bullish. Hedging and bearish speculation are extremely low and that is why the VIX has dropped to an 18-month low. We are due for a swift decline and I am not buying into this rally.

I am placing conditional orders to buy puts on weak stocks when they break technical support. Commodity stocks have had a great run and I believe they will pull back tomorrow on a strong Unemployment Report. Interest rates will rise and the dollar will strengthen. The dollar carry trade is very overcrowded and traders are short the dollar and long commodities. A short squeeze would force them to sell commodities. Longer-term, some of the cyclical stocks will run into trouble when their earnings fall short. If I miss some of the upside to this market, I won’t lose any sleep. I do not want to get sucked in to this rally only to have the rug pulled out from under me. I am not buying puts right now so I am not picking a top. As the market moves higher, I will adjust my put orders. I feel that risk of a swift 5% drop increases every as move higher. 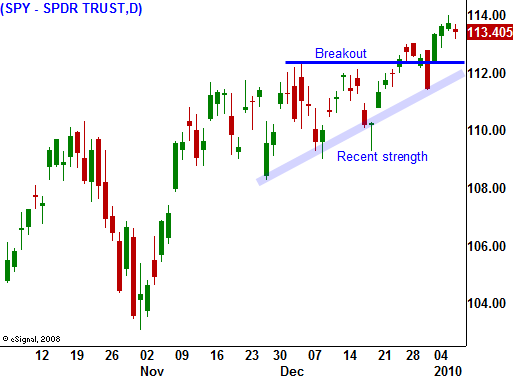