The Bid Is Strong And Stocks Have Shouldered A Weak Employment Number!

The true test for market strength is a dose of bad news. This morning, the Unemployment Report disappointed. The economy lost 85,000 jobs when most analysts had revised their numbers to reflect job growth. November’s number was raised by 15,000 and we did see positive job growth a month ago. I love the way these numbers are manipulated. Over 600,000 unemployed Americans were removed from the statistic this month because they have stopped looking for work. Did they just save them up for a rainy day? That is a huge number and if they had been included, unemployment would have been much higher.

The EU also reported an unexpected rise in the unemployment rate. The 16 nation union saw its rate rise to 10%. It continues to climb and economists believe it will hit 10.7% this year. Analysts were looking for a .1% rise and it went up .2%. This comes after a year of extraordinary government stimulus across the EU. Third-quarter GDP only rose by .4% (compared to our 2.2%). Clearly, Europe’s problems are at least as bad as ours. Many EU members are struggling and like Greece, they know they can’t count on the European Central Bank for help.

Despite all of this bad news, the market is barely down. It has been able to shoulder this setback. As you can see in today’s chart, momentum is building after the breakout. The long green bodied candles show that persistent buying has pushed the market up to close near its highs of the day. There is a tremendous amount of optimism and it will take a series of bad numbers to dampen spirits. The bid to the market is stronger than I expected and I thought that bulls would be fleeing for the exits after today’s news.

I still feel that the market will hit resistance and it will crown in the next few months. The global stimulus that has been thrown at the crisis is unprecedented. This was not a halfhearted attempt to spur growth. Governments pulled out all the stops and threw everything they had at the crisis. Even then, the economic growth has been marginal. Huge deficits remain and additional stimulus will jeopardize debt ratings for many countries.

I cam across an interesting statistic that helps put things into perspective. Billions of dollars are being thrown around by the government like chump change. Corporations have been fiscally responsible and they have worked hard to beef up their balance sheets over the last 10 years. Collectively, all of the companies in the S&P 500 have $820 billion in cash. In some respects, that seems like a lot of money. However, when you consider that our country ran a deficit twice that large in just one year, it seems small.

As we saw in this month’s employment number, corporations are very slow to rehire. They have slashed expenses and they can wait patiently for sustained demand.

Bulls are content with the unemployment number because it means interest rates are likely to stay low. Earnings will be the next focal point. Alcoa announces Monday, but releases don’t really take off for another week.

Trade balance, the Beige Book, initial claims, retail sales, CPI, Empire Manufacturing, industrial production and consumer sentiment will be released next week. The market will spend the week digesting today’s Unemployment Report and any new signs of weakness could weigh on stocks. Inflation has been creeping higher and some Fed officials raised their expectations in the Fed minutes that were released a few days ago. That means the CPI will be watched closely on Thursday along with import/export prices on Wednesday. Inflation would definitely spark selling.

The market has been strong on Mondays and there have been 10 consecutive rallies. Traders are aware of this and they will not aggressively short today. Next week’s option expiration could have a bullish bias. An extraordinary number of calls have been purchased this week and if the market ticks higher, buy programs could kick in. I believe this would have been much more likely if today’s number was better.
The market’s pattern is “buy the rumor and sell the news”. We rallied into today’s number and then pulled back. Stocks have moved higher ahead of earnings. Fantastic results are priced in and after the banks post numbers, I believe we could see selling in February. The recent momentum will stall and I expect back and forth action next week. Optimism ahead of earnings and a bullish expiration bias will be offset by higher inflation and weaker economic news. 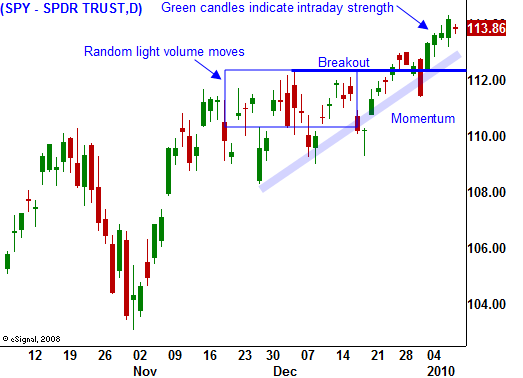