No Matter What We Hear Tonight – The State Of The Union Is Weak!

The market has not been able to snap back after last week’s decline. In prior months, material declines represented buying opportunities and bulls quickly stepped in. This reluctance tells me that the market is tired and sellers are eager to take profits.

This morning, overseas markets were weak for the third day in a row. Yesterday, Japan’s credit rating was lowered by S&P 500 and that is having a lingering effect. Last week, China demanded that its banks hold off on new loans until February. It is trying to head off an overheated economy. I believe they will be sitting on stockpiles of inventory this year because they have overestimated demand. Real estate is also reaching a speculative crescendo. They will have over 30 billion square feet of commercial space. Every man, woman and child in China could have a 5 x 5 cubicle.

Europe has been weak because of credit worries. Portugal, Ireland, Italy, Spain and Greece (PIGS) are all running huge deficits and these countries have massive unemployment issues. The European Central Bank has stated that it will not bail out Greece. As a result, Greece had to raise capital. They successfully held a bond auction over the weekend and the bid to cover was around three. That was a good showing, but they paid dearly for that capital. This morning, interest rates in Greece skyrocketed by almost 50 basis points on a ten-year bond. The appetite for a new issue will be low and the risk premium has been priced in. Eastern European countries are also in dire straits and this will likely be the source of the next market selloff.

New home sales in December fell by 7.5%. Most people don’t realize that 50% of the job growth from 2002 to 2006 was tied to the housing market. This includes homebuilders, suppliers, realtors and lenders. This is a critical part of our economy, but it won’t recover anytime soon. People that can’t afford to live in homes are occupying them. Banks are not foreclosing on properties because they don’t want to flood the market with new homes. That would further depress prices and they would be forced to take write-downs. Financial institutions would rather sit on these toxic assets as long as possible. Banks are not lending because they know they are sitting on loans that could default. The crisis has spread beyond subprime and 15% of all homes are delinquent or in foreclosure.

I do not support a Treasury Secretary that evades paying his taxes, but he is hardly the source of the current problem. Geithner is getting grilled today before Congress today. Chairman Bernanke has also been grilled and his reappointment has met resistance. The problem is so basic, but no one wants to take responsibility. The government and corporations filled a bottomless bowl with easy money. Being the gluttons that we are, we feasted until we dropped. We need to stop finger pointing and we need to start living within our means. Yes, that means lean times lie ahead.

Tonight, Obama will deliver his State of the Union Address. I’m sure we will hear about all of the successes during the last year. TARP that was largely rammed down the throats of financial institutions has been repaid and we will hear how the taxpayers made money on the bailouts. I don’t expect to hear about the $1 trillion in aid that we will be providing to Fannie Mae, Freddie Mac, the AIG or GMAC. This money we will never see again. Corporations that are being fiscally prudent will also be blamed for not hiring employees back during uncertain times. Perhaps they should be more reckless and operate like our government. Obama is likely to talk about his three-year partial spending freeze. Unfortunately, that won’t include Social Security (25%), entitlement like Medicare (25%) or defense spending (24%). His cuts will be taken from the smallest piece of the pie and they won’t remotely offset an expensive health-care plan. Our nation’s deficit is projected to hit $1.35 trillion this year.

There are many storm clouds on the horizon. As for this week, I still believe we will see a bounce after the GDP number and Monday should also be strong. End of month/beginning of the month fund buying will help to push the market higher. Many traders know that as January goes, so goes the year. We are likely to finish the month in negative territory. By the middle of February I am looking for a gradual decline that will last into summer.

I could get depressed when I think about where we are heading, but I’d rather think about the money I can make on the way down. Cyclical stocks are very weak and the guidance has been dismal. Most of them have topped out and they have broken support levels. Look for entry points and plan on riding these stocks lower for the next few months. Longer-term out of the money put debit spreads make a lot of sense given my forecast. Option premiums are still relatively cheap. Use any rally to scale into these positions. 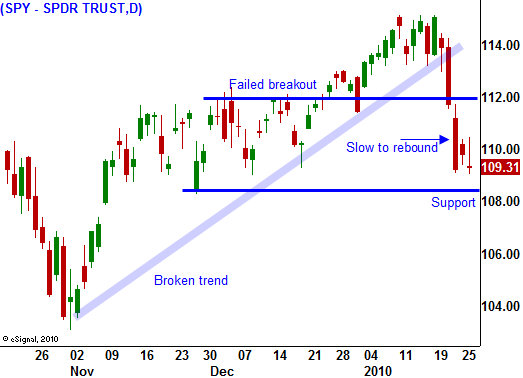