Good Economic News Has Restored Confidence – Resistance At SPY 112 Should Hold Till Friday!

Yesterday, the market staged an impressive rebound and the SPY closed above major support. Traders braced themselves for more bad news and they sold into the weekend.

Monday’s have been particularly strong and the last 13 have produced gains. This is a tough pattern to trade against. Beginning of the month fund buying and decent economic news (Q4 GDP, Chicago PMI, ISM manufacturing) sparked buying. Earnings have also been decent although that was already priced into the market. Europe is the biggest concern and conditions won’t deteriorate overnight.

Many EU members are perilously close to a financial meltdown. The ECB is not going to bail them out and the entire union could fall apart if a financial crisis materializes. Governments have flooded their economies with money and this stimulus still has to run its course before conditions worsen. This could take many months and we will see warning signs along the way. Until then, the market will sell off on news of financial distress and then it will rebound once fear subsides. I believe we will see a gradual decline with some sharp bounces along the way. Be prepared to sell rallies when they hit resistance.

Tomorrow, the ADP employment index will give us a sneak peek at Friday’s unemployment report. The report has been under estimating jobs and traders could discount a weak number. On the flip side, they will embrace a good number. ISM services are expected to rise by a full point and ISM manufacturing handily beat estimates this week. The service sector is much more important since it represents 80% of our economic activity. All told, the numbers should be market friendly.

Initial jobless claims have been weak during the last three weeks and Friday’s Unemployment Report could disappoint. If the market continues to push higher, we might set up for a decline on the release. Resistance at SPY 112 should hold until the release.

Excessive optimism resulted in the dramatic decline. Bullish speculators bailed out of the market once support was breached. Asset Managers don’t like to chase prices and they were not aggressively bidding for stocks. Once the market cracked, profit takers reduced their risk and sold stocks.

Volatility has returned to the market and we will see some nice moves. Option premiums have jumped and I am once again selling credit spreads. At this juncture, I am selling out of the money put credit spreads on healthcare stocks. The earnings have been good and these stocks held up well during the last market decline.

I believe Friday’s number will be weak, but it won’t be bad enough to raise concerns of a double dip recession. Once the initial shock runs its course, fear will subside. We will likely need a few more months for conditions to deteriorate to a concerning level. Past stimulus is still running its course and that is supporting employment. Once those programs run their course, our economy will start losing jobs.

The major level to watch is SPY 108. We are above it and I am selling OTM put spreads on strong stocks (in small size). I am also lining up put purchases on weak stocks so that the orders trigger if the stocks break support. Those breakdowns are likely to come on market weakness. I’m not going to trade every wiggle and jiggle in this market and I don’t mind missing a rally.
This market bounce could run up to SPY 112 this week, but I expect it to stall there. 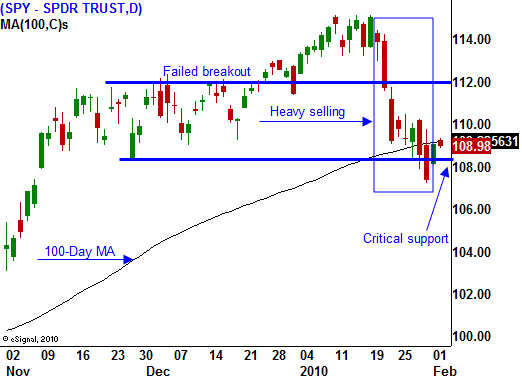