Fear Has Returned – Yesterday’s Decline Was the Biggest Since April 2009!

Yesterday, the market melted down and it posted its largest loss since April 2009. Europe is far and away the greatest concern. Many countries are running huge deficits (12% of GDP) and high unemployment rates are adding to the problem. Tax revenues are down and transfer payments (unemployment compensation) are increasing. In order to meet their financial obligations, these countries need to raise capital.

During our financial crisis, the ECB held interest rates high and they did not recognize the gravity of the situation. The EU is comprised of 29 countries, each with its own political and economic system. This makes it difficult to make decisions and to act in unity.

Debt levels in Europe are much higher than they are in the United States and their unemployment rate is also higher. Spain, Portugal, Greece, Ireland, Italy, Bulgaria, Latvia and Lithuania could all default. Two weeks ago, the ECB said they would not bail out Greece. They held a bond auction and afterwards, their bond yields spiked. The appetite for risk was gone since the European Central Bank could not be counted on for support. Wednesday, Portugal went to market with a small one-year, $1 billion bill auction. This is a very short-term maturity and these auctions normally go well. It was under subscribed by more than 30% and Portugal had to cancel the auction. When you can’t even issue short term debt, you have a dire situation. This is what caused the major meltdown in Europe and the United States yesterday. Since then, the ECB has agreed to help out Portugal – short term.

The bigger problem is that there are many cracks in the dam and the ECB will soon run out of fingers. Once one or two countries fail, we could see a cascading effect. Eventually, investors start to wonder who is safe and banks stop trading with each other. Credit freezes up and we are right back where we started a year ago.

Decades of poor lending decisions and overspending will not be solved in the course of the year. The credit risk has shifted from financial institutions over to governments. Normally, their deep pockets would allow them to shoulder short-term weakness. Unfortunately, sovereign debt levels are extremely high and they are perilously close to default. As credit worries escalate, bond yields will jump and is harder and harder to borrow money.

Earnings, interest rates and economic numbers are all important, but they will take a back seat to Europe’s financial crisis. Right now, the world will be waiting to see how this all plays out. Given the ECB’s reluctance to help, I don’t believe this will end well. In the next six months conditions will deteriorate and the risk will increase.

Europe favors socialism and this is where the United States is headed if we follow Obama’s plan. The government can’t even run Amtrak, but we should trust them to manage our retirement funds and to provide us with excellent healthcare. As any veteran and they will tell you about state run healthcare.

I need to end my political ranting before I get myself all worked up on a Friday.

The breakdown yesterday was severe and fear has returned to the market. Europe’s credit issues will not be easily solved and this dark cloud will not go away anytime soon. China could also be a potential powder keg. Money has been very loose there and I suspect they have overbuilt similar to Dubai. They will have 30 billion square feet of commercial office space when projects are completed, enough for a 5 x 5 cubicle for each man, woman and child in China. When consumption fails to return, they will be sitting on stockpiles of inventory.

As long as we are below SPY 108, stay short. This market has a very nasty feel to it and we could see a big drop today. 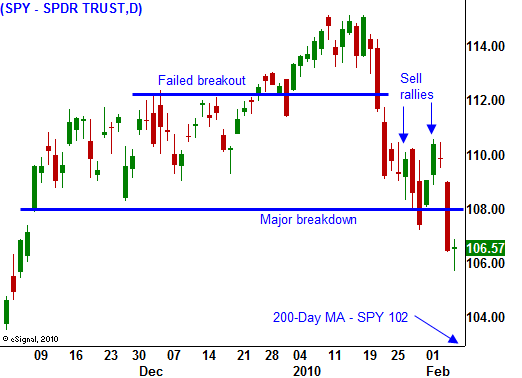