More Signs of Stress In Europe – The Pressure Is Mounting!

Yesterday, the market took a breather after a big week of gains. It rested just below horizontal resistance at SPY 112 and lackluster trading set in.

Before the market opened this morning, weakness in Europe set a negative tone. German business sentiment fell for the first time in almost a year. A survey of 7,000 firms revealed that the business climate index had fallen from 95.8 down to 95.2. Analysts had expected a reading of 96.1. This is important because Germany is the strongest EU member and is the largest exporter in the world.

Two weeks ago, the EU reported flat GDP growth. That was worse than expected and the unemployment rate is above 10%. This morning, Commerzebank (the second largest bank in Germany) said it lost $2.6 billion in Q4. The fourth-quarter loss widened on write-downs related to bond issuer investments and it set aside funds for bad loans. Deutsche Bank could be in a similar situation.

Greece is under mounting pressure from the markets and EU policymakers to reduce its large debt and deficit. It has to do so by mid-March in order to gain support from the EU. This is not a matter of making some minor adjustments, dramatic measures need to be taken and it will spark civil unrest. Greece will be forced to hold a bond auction in the next 2 to 3 weeks and banking officials are fearful. The last $4 billion auction went well initially and then a huge risk premium was priced in just a few days later. The appetite for Greek bonds is done and the cost of capital will jump.

Speaking of bond auctions, we will hold a record bond auction for $126 billion this week. We have a mountain of debt ourselves that needs to be financed. Our average maturity is four years and we will continuously be rolling our debt over. The market will be watching for signs of stress. If the demand is low, the market will sell off. I don’t believe this will be an issue – yet. With all of the other global credit concerns, our bond auctions have gone well as investors seek safety.

Our banks are also struggling and this morning the FDIC reported that the number of “problem” banks jumped 27% in the fourth quarter. This is the highest level since 1993. Chairman Sheila Bair said that the number “sounds scary”, but she described the banking industry as “challenged but stable”. Regulators have already closed 20 US banks this year. It is likely that bank reform will be passed, making it even more difficult to generate profits. Proprietary trading will be prohibited and investments in hedge funds and trading firms will also cease. The pressure is mounting on this sector and financial stocks look like an attractive short.

This morning, we learned that consumer confidence fell dramatically from 56.5 down to 46. Analysts had been forecasting a reading of 55. Consumers are still worried about the economy and they feel it is even harder to get a job now than it was in January.

Retailers have been releasing earnings and the results have been decent. The retail sector has held up well and the RTH is near its high of the year. The expectations are relatively high and most stocks are selling off after the news. With consumer confidence dropping, there is room for disappointment.

As I’ve been saying, I am bearish. I just want to generate income while conditions deteriorate. I feel the market could tread water for a month or two. Then we will see a major decline. You never know when the big move sill start so you have to be ready now. I have lined up my put trades and they will automatically fire when stocks break support. SPY 108 is a key level.

This week’s record bond auction should go well and initial claims, durable goods and GDP should not cause a major decline. The big news we are waiting for will come from Europe. Continued banking issues and poor demand for bonds (PIIGS) will be the key. If our unemployment rate starts to climb, that would be another catalyst for a sustained market decline.

The next big move will be down. Keep your size small and sell out of the money credit spreads to generate income while you wait. 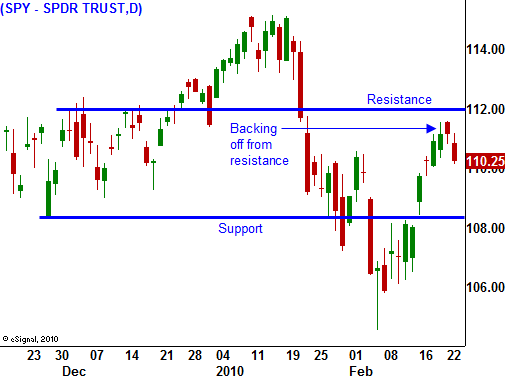