The Market Is Tired After A Big Week – Resistance At SPY 112 Is Holding!

Last week, the market staged an impressive rally and it broke through horizontal resistance. The SPY is back above 108 and it is within striking distance of 112.

Bears had a chance to defuse the upward momentum last Friday. The Fed raised its discount rate by .25% and the news sparked a negative reaction. The S&P 500 was down 10 points in early trading. Throughout the course of the day, the market was able to regain its footing and it finished on the plus side.

Traders rationalized that banks no longer need hand outs from the Fed and that is a positive sign. Financial institutions have been able to raise private equity to beef up balance sheets. The discount rate couldn’t stay at 0% forever and this was an emergency procedure. Now that the financial crisis has seemingly passed, the Fed can take off the training wheels. It will also start selling assets as it unwinds the quantitative easing program.

This morning, Obama is outlining new proposals for health care reform. He knows that he needs support from Republicans and moderate Democrats. The new changes will limit rate hikes by HMOs and as a result, they are a short. They are being squeezed from both ends. Medical expenses are rising and the government is limiting how much they can charge. Last week, WellPoint (WLP) said that they might have to increase insurance premiums by 39% in California. That statement served as a battle cry for reformists.

There are a number of important economic releases this week. They include consumer confidence, new home sales, initial claims, durable goods, GDP, Chicago PMI and consumer sentiment. Most will be released Thursday and Friday so the week is back-end loaded. The news should generally be positive.

The market is going to claw its way higher until there are definite signs of stress. Earnings are strong and interest rates are low. Those two factors are the focal point right now.

When job losses start to rise again, fears of a double dip recession will resurface. The government’s stimulus still needs to run its course before unemployment can increase. Credit concerns in Europe will worsen in coming months. We need to see a few bad bond auctions in Europe and Greece has plenty of debt to roll over. The EU’s GDP disappointed two weeks ago (0% growth) and the unemployment rate in the EU is over 10%. The credit problem will not go away and the EU is reluctant to provide aid to its members. As a responsible citizen, I don’t want to bail out my neighbor who has lived beyond his means. I am even less enthused about bailing out people in another country. This is exactly how German’s feel and they are expected to provide aid to Greece. This will not be popular with German citizens.

Even if Greece gets aid, what about the other eight EU countries that are perilously close to default? As they fall one by one, who will bail them out?

This market can continue to grind higher and it can discount this credit crisis until there is an actual failure. Once that happens, the stocks will fall dramatically.

I am keeping my size small and I am selling out of the money put credit spreads on strong stocks and out of the money call credit spreads and weak stocks. I am bearish on financials and HMOs and bullish on tech. For the time being, I just want to generate income while I wait for conditions to deteriorate. Then, I will be an aggressive put buyer. 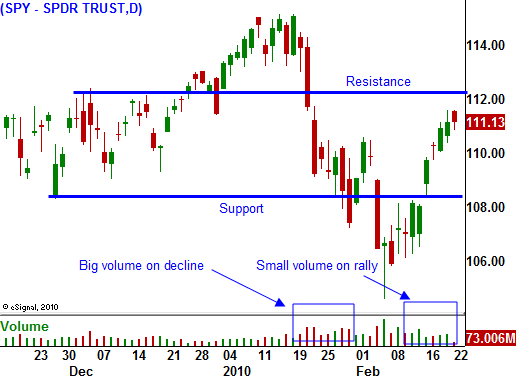