Yesterday, the market declined on renewed European credit concerns. Greek two-year interest rates spiked to 19% even though the EU and IMF have agreed to provide $60 billion in aid.

Unfortunately, Greek citizens aren’t grasping the gravity of the situation. Today, Greek Air Force pilots called in sick. They along with many others are protesting austerity programs. Without massive reform, the country will simply burn through the cash.

Credit concerns have spread to Portugal and Spain and those yields are pricing in risk. Yesterday, Portugal’s debt rating was lowered and this morning, Standard & Poor’s lowered Spain’s debt rating. This will make it more expensive for them to attract investors. Italy is not far behind and this week, demand barely covered its bond auction. The PIIGS will be auctioning over €200 billion in debt during the next few months and these auctions could go poorly.

Traders have been anxious to sell the earnings news. Corporations have vastly exceeded earnings and revenue growth, but only 50% of the companies that have beat estimates have rallied after the release. The market is overbought and it is vulnerable.

This afternoon, the FOMC will meet. In light of shaky credit conditions in Europe, I don’t expect them to change their rhetoric. They want to stay “dovish” as long as possible. I also don’t expect them to sell securities. Some Fed officials believe that they should start to unwind mortgage positions. This would effectively reduce money supply and I believe we are a few months away from seeing that. When it does happen, the selling will be very controlled.

The headwinds are blowing and the market has been up for eight straight weeks. Resistance is building at this level and we need a pullback. Tomorrow’s initial jobless claims number could provide another dark cloud. During the last three weeks, initial claims have been dismal and job growth has stalled. If claims come in above 460,000 (445,000 expected), the market will sell off. That will make four bad weeks in a row and that trend will weigh heavily on next week’s Unemployment Report.

Bullish speculators need to get flushed out of this market and a decline to SPY 115 would do that. How the market reacts to major support at that level will determine if you should take profits on short positions or add to them. If the market gradually drifts down to that level and stalls for a day or two, take profits. On the other hand, if the market easily drops to SPY 115 and it takes out that level, buy more puts. This will prove that enough selling pressure has accumulated to take out a major support level.

The most likely scenario is a swift decline that finds immediate support. This will flush out bullish speculators and it will attract buyers. Asset Managers do not want to chase this market and they will wait for prices to come in. We need more time for the financial crisis to worsen and for economic conditions to deteriorate. By late summer, these two forces should come together.

Greece will secure financing and that problem will temporarily be solved. Unfortunately, a line for additional aid is forming and Portugal, Spain and Italy will be asking for help. Huge debt levels and slow growth in Europe almost guarantee that this crisis will get much worse.

Since Spain’s debt rating was lowered this morning, the market has declined. Bulls have not been able to stage a rebound and bears are gaining confidence. I believe we will see a late day selloff. The chance for a dismal initial jobless claims number also looms and I am taking bearish positions today. I am not going overboard since I believe this decline will be swift.

Evaluate the bounce and try to wait for the last hour of trading before buying puts. If the rally stalls or falters, take a position. 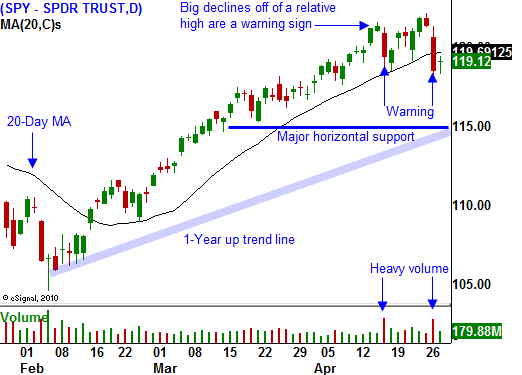